Also in this issue:
The Top 10 Best (and Worst) Minolta Cameras Ever


I'm starting to expand into video.  This show-and-tell piece turned out to be so large that it's being split into two parts.  Watch Part I below:

Things I Neglected to Mention
How I Shot the Above Video

My humble portrait studio is being pushed to its limits as there's barely enough room in there for video lights and THREE video cameras.  And my pull-down shade, while perfect for head-and-shoulders portraits, was barely wide enough to accommodate the scene I was shooting.  Had I zoomed out just 1mm more (so I could have some breathing room above my head) you would have seen the left and right edges of the white screen.  And I couldn't have moved the cameras back any further.  So for this video I decided to keep my head cropped (which isn't so bad - besides, there's some precedent). 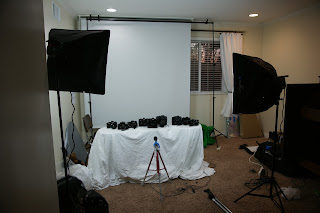 The three cameras I used were the Sony Alpha 77, 65, and 55.  The 77 and 65 made use of their Manual Exposure for Movie modes, while I had to trick the Alpha 55 into overexposing so the exposure and white balance for all three cameras came out the same.  I had one camera set to the wide shot, one fixed for close-ups (that was the A77, and I moved its articulated screen to the top so I could see how high to hold the camera for the close-up shots).  The third camera was a medium shot somewhere between the two, which I ended up not using.
I went cheap on the lights.  My first hope was that I could retrofit my existing softboxes and diffusers which I use for the wireless flash and just put in some constant light source.  Too difficult.  So instead I sprung for an inexpensive kit on ebay.  The kit is decent for what it does, and while a good value, they weren't designed for the kind of high-key lighting I was attempting.  (While great for green screen shooting, they weren't bright enough to get the background looking bright at f/8.  I had to use f/4 and bump the ISO to 800.)

Now, for sound...  The built-in mics on those cameras just won't do - they're too far away and you'll pick up all the room acoustics.  I do have some professional microphones which I could plug directly into one of the cameras, however those of you who own my books on any of the aforementioned cameras already know that there's no way to turn off the automatic gain control on the sound.  So plugging in a good mic would just result in some very high quality hiss during the silent portions.

There are two ways around this:  1) BeachTek makes a device which accepts all professional microphones (and provides monitoring too) and generates an inaudible 20 kHz tone as part of the audio feed. Too low a frequency to be recorded, but enough to fool the Automatic Gain Control circuitry and keep it from bumping up the audio during quiet parts.

2) The other way is to do what Hollywood filmmakers have been doing since the 1930's: Record the sound separately, then add it in post.  So I grabbed my Zoom H4n digital audio recorder (which I now use for all my Xaphoon recordings), plugged in the mic, set the levels manually, and placed the mic in front of the table, just below the frame: 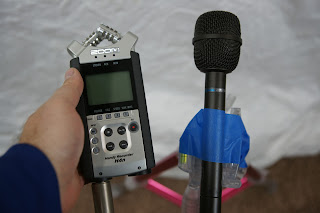 The entire 15-minute presentation was done with one continuous take, with all three cameras rolling at once.  Switching between the different cameras was done on my computer after-the-fact.  Sony Vegas (which is actually really good software) has a mode where you can take up to four pre-recorded video feeds, synchronize them together (along with the audio) and then switch between them as they're playing back like a live director would do.  Not bad.
Seminars - Copenhagen, California, and Colorado

While it's true we're doing fewer seminars this year, the first three of the four are going full steam ahead!  Right now the seminars for Copenhagen, Santa Monica California, and Durango Colorado are all open for registration.

This should be a fun week (and I'm sure I'll be exhausted when it's over) and I'll have some more tricks up my sleeve if the light is as bad as it was during my first visit in 2010. :-)  Here are some links for you if you want to learn more:

The Santa Monica, California seminar will be held on June 9-10, and a 1-day field workshop on June 16th.  Learn more and sign up here.


The Durango, Colorado event is being hosted by the Durango Photo Club, and there will be three events: A technical lecture, a 2-day seminar, and a 2-day Field Workshop all happening between July 12 and July 22nd.  Learn More and Sign Up here


The final seminar for the year, to take place in London (well, Sussex) is still on the horizon for September, 2012, just after the Olympics.  Just haven't had any time to work on logistics.  Stay tuned.


Well, at long last my ebook on the Alpha 65 and 77 is out, and the reviews have been pretty positive - even from readers of previous books.  (I worked very hard to make sure these folks would not be disappointed!)  Unlike my previous books (which were designed to be viewed on a horizontal computer screen), this one is being optimized for viewing on iPads and e-readers (hence the vertical format).  Purchasers of the .pdf file will also get a FREE .mobi version so they can read it on their Kindle ebook reader too.  (Nook and other e-reader owners: an epub version is available but it's still being polished.  Email me privately for more info.)


My next book will be on the NEX-7, which I would have started already if I only had one in my hands.  :-(  It turns out I ordered the Kit version back in September, 2011 and as luck would have it those have been delayed by the Thailand floods the most.  (Who knew?)  Adorama estimates a delivery time frame of July.  I've appealed to a local Sony rep who seems empathetic and willing to help.  Can't wait to get my hands on one!


Until next time...
Yours Truly, Gary Friedman