Two good reasons to turn off the Focus Assist light... 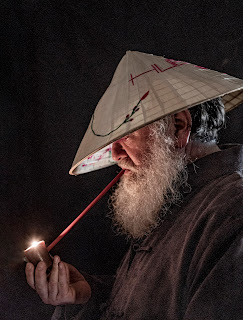 Also in this issue:
===
Reader Bill Gordon writes: "One comment on the auto illumination feature. You and every other author I’ve ever read says there is no reason to turn it off. But there is one place where you need to shut it off. A museum. Generally there is no flash allowed in a museum and this feature will get you yelled at every time. My mother lost a day of shooting once because she couldn’t figure out how to shut it off in the field. Just sayin….."
So now using the Focus Assist Lamp is the equivalent of using a tripod - it gets you in trouble for no good reason.
There's another reason to turn that feature off, and I was reminded of it when trying to take the above self-portrait (as part of my Quarantine Beard series).  But this shot was going to be different -- this time instead of using studio lighting, the light from my face would come solely from the flame in the faux pipe.  Sony A7C, ISO 6400, 1/10th of a second, f/2.8 using the Tamron 28-75 f/2.8 lens, and framed and taken using Sony’s smartphone app.
Read more »
at January 08, 2021 21 comments: