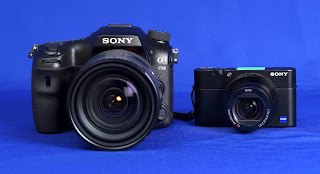 So here I was, on my way back from Las Vegas, and I came across a run-down old building that has a certain "character".  I pulled over and took a few pictures with my A99 II and Zeiss 24-70 f/2.8, then started to head back to the car.  Then I hesitated.

"These conditions are pretty good.  Strong light, so I can shoot at a low ISO with a small f/stop.  I wonder how the RX-100 V compares in these ideal conditions?".  I went back to the car and tried to duplicate the shots I just took using a small-sensor point-and-shoot.  Then I drove home.

The subject matter and the lighting were so good that I suspected enlargements from the two cameras would be indistinguishable.  (Click on any image to see a larger version.) 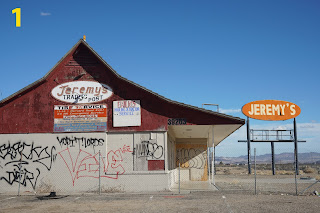 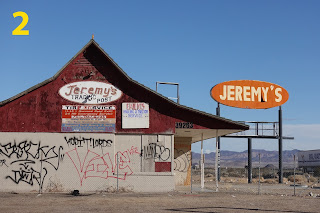 You can download and examine the images for differences yourself.  Here are the links:

Before I go on, I should mention that in my seminars I always say that no matter how tempting it is, pixel peeping is not an appropriate way to evaluate image quality.  The better, more time-honored way is to make a giant enlargement and then view it from a reasonable distance.

And so I blew them up to poster size and examined them.  I was right.  Not only me, but nobody at the Seminar I did in Tuscon could tell which camera took which image.

Okay, how far can I push this?  I knew that at this size, the high-end cameras would have an edge with close subjects having a lot of detail that were well-lit.  So I called a 20-something-year-old friend of mine,  "Come to the studio on Saturday and don't shave for a few days!".  My goal was to give this even more of an acid test: a highly-detailed, high-frequency (not shaven) subject shot with the A99 II and the Zeiss 135mm f/1.8 lens, vs. the RX-10 II (which is essentially the RX-100's small sensor with a superb 24-200 lens thrown on it) under ideal conditions.

My friend called in sick, so I had to be my own subject.  Could attendees tell which camera took which picture? 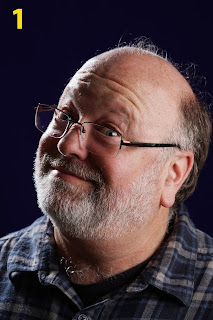 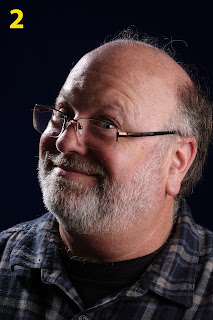 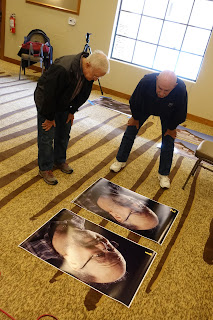 "One of these pictures was taken with $5K worth of equipment", I announced to the room, "and the other was taken with a $1200 camera.  Is one image 5x better than the other?"

While one image was twice the number of megapixels as the other, when enlarged and viewed from a reasonable distance, the two images were very close indeed.  It serves as a reminder that all cameras have been improving over the last decade, even the small-sensor cameras that everyone thumbs their noses at.  Under ideal conditions, it's hard to tell the difference.

So who needs a 42 megapixel camera and high-end lenses then?  I continued my sermon:

I was actually surprised at how close these two cameras performed in this acid test.  Now you understand why I've been singing the praises of the RX-100 and RX-10 cameras for so long.


Do you think there's a need for a book on the new Lumix GH5?  Let the discussion forums know; and have your friends contact me at Gary at Friedman Archives dot com.

The next seminar is in St. Albert (just outside of Edmonton), Alberta, Canada.  If you'd like me to bring the seminar to where you live, have your local photo club get in touch with me.  Here's what the rest of the year looks like (the next one is occurring in about a week!):

(And don't forget they're available as a streaming version as well if you can't make any of these.)

Ever wanted to have your work shown at an art gallery, without having to actually invest in giant enlargements and pay a $2500 fee for the privilege?  In the next issue I talk with the owner of the Heaven Art Gallery in Scottsdale, Arizona, who has replaced canvases with giant HDTV screens and allow photographers from all over the world to display their work digitally.  (Art-quality prints are then made in the back room on demand.)

Their introductory offer will be gone by the time Cameracraft goes to press, so let me share this with you now: YOU can have your work shown there for as little as $1 per image!  (Then you can claim you were exhibited in a major art gallery. :-) )  Go to www.heavenartgalleryusa.com , and click on "Contest".  Have a look and share this with your friends - this makes galleries accessible to everyone!

I also talk with Dr. Barry Shaffer, who combines impressive classic photography with a humanitarian cause and has amassed his work into an amazing upcoming book. 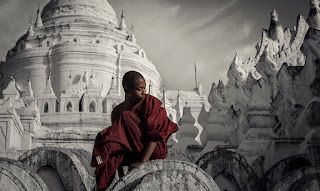 You can read the previous Cameracraft issue free on line but the print quality is really what it's all about - https://issuu.com/iconpublications/docs/00_8aa8d5bbe4a939  If you like what you see, support this old-school labor of love by subscribing!

Remember the big brouhaha a year ago, when the FBI wanted to read the contents of a terrorist shooter's phone, and Apple said no?  That re-ignited the eternal "Should governments have easy access to encrypted communications?" debate.

Right about that time I proposed a technical solution this very problem, which would break the impasse between the "Strong encryption prevents the government from preventing terrorism" camp and the "If you install a back door, hackers will be able to access it also!" camp.  (You can read about my proposed solution here, and scroll down to "Encryption That Makes Everyone Happy".)

Shortly after that was published, someone else proposed my very same idea to a reputable engineering discussion forum called risks.org (where engineers discuss potential risks of technology to society in an effort to prevent ill-thought-out systems).  You can read that proposal here.

So my idea has been vindicated!  Although I'm not impressed with the moderator's response: he essentially dismissed it because it wasn't a million percent perfect, while completely ignoring the fact that it was five hundred thousand times better than what we have now.

Until next time,
Yours truly, Gary Friedman