A Bigger Problem than Bit Rot 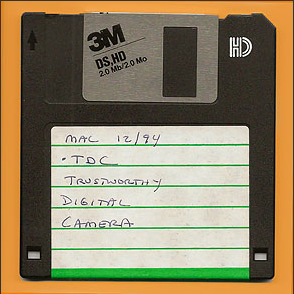 In the computer world, many people worry about "bit rot" (data erosion) when it comes to archiving old data.  And that's a good thing.  But there's an even more serious threat to data life than bit rot... it is format change.  Somewhere upstairs I have a low-density floppy disk of a paper I wrote on an Atari 1040ST using WordPerfect.  The data is intact... but I defy anyone to read it!!

In a similar vein, I also have a high-density floppy containing a paper I wrote 15 years ago outlining the technical details of the "Trustworthy Digital Camera" - an invention I eventually patented - which I need to be able to read but can't because I don't have easy access to a Mac.  It was written on a Mac using OS 8 (Motorola CPU) and Microsoft Word, and I need to convert it into a .pdf file.  It might be readily readable on modern equipment - I don't know.  Can anyone out there help me in this quest?   If so, please send an email to Gary@FriedmanArchives.com and I'll get this floppy into your hands!

For those who are wondering, the Trustworthy Digital Camera works just like any other digital camera.  The difference being that if you took a picture with this camera, you'd be able to prove in court that the image had not been manipulated by computer.  I thought this invention (like other inventions I came up with through the years) would change the world, and restore the rapidly eroding credibility that the printed photograph once enjoyed.  (And to a small degree it has, since Nikon, Canon, Epson, and Panasonic have all implemented this idea in one form or another.)  Too bad I don't get any royalties -- it turns out that NASA is not in the business of tracking down patent violators, and even if they were, they have this rule that once you get a patent filing bonus you're ineligible for royalties should that patent be licensed.  (Scholarly comment: "Hmmmph!")

Eight hours after publishing the newsletter I received a flood of emails offering to help with the floppy issue!  One person even had the exact same hardware and software configuration that was used to create this floppy, so for the time being I'd say my problem has been addressed.  One thing that most people don't realize is that not only were Mac floppies formatted differently from IBM floppies, but also (according to my recollection) Apple's floppy disk hardware specification would have them spinning at different rates depending upon whether the read/write head was on the edge or the center of the drive, thereby keeping the data rate consistent no matter where on the disk it was stored.  This means that it's not only a formatting but a hardware compatibility issue as well, and therefore Linux boxes with USB floppy drives would not be able to read and convert the data.  Anyway, thank you all for your wonderful show of support and helpfulness!