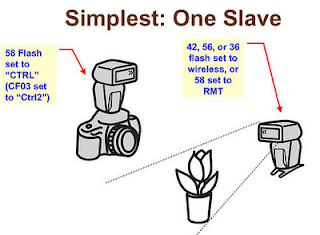 With the introduction of the HVL-F58AM flash, Sony has completely revamped the wireless flash protocols -- the time between pre-flash and exposure has been shortened, and more addressing capabilities have been added.  The result?  Automatic Ratio mode has returned (this feature worked with film cameras brilliantly, but was disabled in digital bodies for technical reasons), and now you can control up to 3 banks of flashes (well, sort of) from the rear of the 58.

Okay, but how does it work, and how much of it is backwards-compatible with the Minolta / Sony 56 and 36 flashes?  Can you mix and match the 56/36 and 58/42 flashes?  Read on to find out!
Reading Sony's documentation to learn the answers to these basic questions can be a frustrating experience.  (In Sony's defense, it wouldn't have been nearly so complicated had Sony not tried to be backwards-compatible with their older 56 and 36 flashes.)  So here's a summary of some basic truths that are essential to know if you are going to be using wireless flash with the A900 (or A700 with Firmware Version 4) and the 58 as the wireless flash controller:

So all these modes and compatibility issues might seem a little daunting, so here's something to make it clearer.  Below is a diagram showing the simplest configuration possible for wireless flash:

Notice that with this configuration, illumination for the subject comes only from the slave flash.  (The Master only sends out Morse-code-like commands using weak flash pulses, and doesn't affect the exposure significantly.)  And the 58 has been put into the old-protocol "CTRL" mode so it can readily trigger any wireless flash you may have (36, 56, 42, or 58).

Next, let's talk about groups and ratio flash.  First, here's a quick recipe for ratio flash: 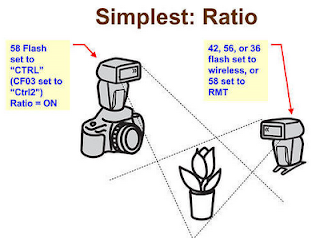 (Things don't look so intimidating in diagrams, do they?)  This setup is identical to the previous diagram, except that "Ratio" mode on the 58 has been enabled.  In this mode, light to illuminate the subject comes from both the slave as well as the master, and you can control the proportions from the back of the Master.  Dialing in a ratio of 1:4, for example, means that the slave outputs four times as much light as the master.

Finally, let's figure out what's involved to achieve Sony's Marketing claim of "Up to three groups of flashes can be set up for optimal, complete control of lighting via a wireless connection".  Here's how to do it: 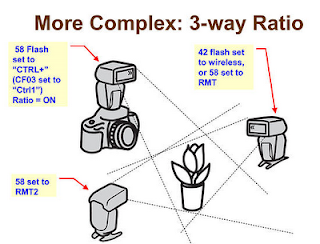 Flashes literally become groups when you have more than one configured the same way: 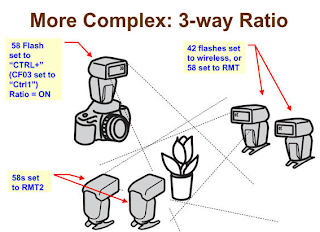