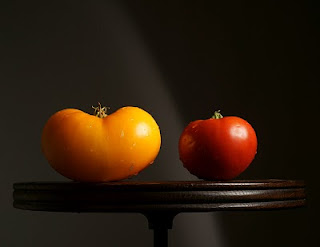 The shot above is a stock shot, using tomatoes taken from our garden out in back.  (Must have been the soil mix responsible for the largeness of the left one...)   Below is the identical shot, taken on a tripod with a cable release, using just the ambient room lighting: 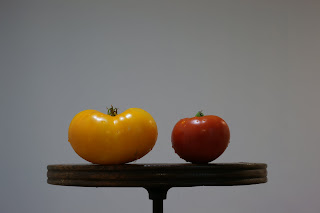 I'll ignore the obvious lesson that the really good light adds drama and can be considered just as important a subject as the tomatoes.  Now click on both the above pictures and ask yourself "Which one looks sharper?"
Of course the actual answer is that they're both equally sharp.  A quick pixel peep proves it:

But the light in the top shot really brings it all home.  So, the moral of the story is: "Sharp optics are important, but they won't perform their best without good, directional light to make their sharpness really stand out!"  (And I promise I won't write about this subject anymore. :-) )

But there are more lessons from this shot, too.
How I took this shot 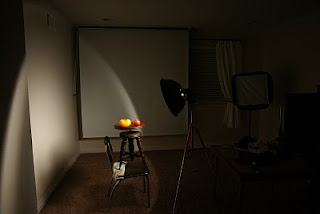 This shot was done with just one wireless flash and one diffuser - in this case my trusty and quite affordable Lumodi beauty dish which I have written about before.  My 56 flash was set to 1/4 manual output and the camera was set to something fast to ensure that all the light would come from the flash and no ambient light would affect the shot.  In this case I set my A900 to 1/200th of a second at ISO 200, and my Minolta 80-200 G lens was set to f/16.

Interestingly, this is the first time I ever tried to use the beauty dish in a dark environment, and it's the first time I ever noticed the harsh edge of illumination it can leave on your background.  At first I thought it was an artifact worthy of removal (which I was able to do by redirecting the diffuser slightly, see the shot below) but after I looked at both on my computer I decided that that artifact added a certain element that really made the shot stand out.  It's the shot with the artifact that made it to my website.  The shot without it was composed vertically (I always do one of each) to have room at the top, to be used as either a magazine cover or a poster saluting the Reagan administration. 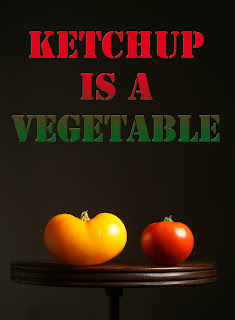 What Other Faults can we find?

Now on to the futility of pixel peeping.  Below is an enlargement near the upper-left-hand corner of the very first picture in this blog: 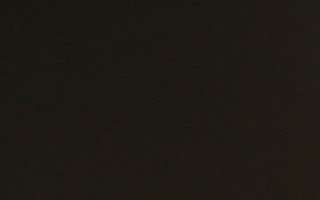 "Yeow!  Look at all the splotchiness in the background!", I said to myself after having zoomed in to unreasonable amounts for no particular reason.  (And this was the converted RAW file using Sony's updated Image Data Converter software!)   Two minutes after the panic had subsided, I took a deep breath and printed the picture on my trusty HP photo printer using the best settings and the best paper I had on hand.  No sign of splotchiness; the background was perfectly smooth and artifact-free.

(It turns out that the new version of Adobe Camera Raw does a much better job than Sony's software...the background is more homogeneous and no splotchiness at all.  But as this little exercise should point out, IT DOESN'T REALLY MATTER!!)

If you look closely you can see these kinds of artifacts all the time - they're caused by the actual colors being on the edge of what the camera is able to capture. Have a look at the picture below: 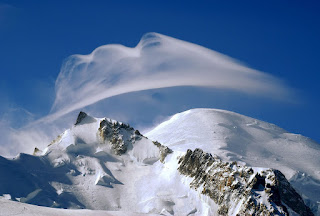 Now have a look at a close-up of the upper-right-hand-corner (click on it and observe the 2-tone pixelation of what's supposed to be a continuously smooth blue sky): 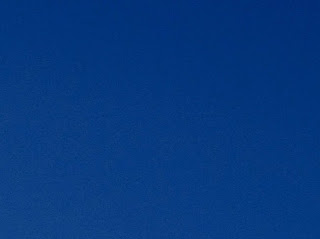 YUK!  But again, it doesn't print.  Pixel-peeping in this way is akin to looking at the dots of newspaper photos obsessively.  Nobody benefits - especially you.  If your light and composition are strong, then that's 98% of a great photo.  Few will be concerned about things like pincushion distortion or color gamuts. 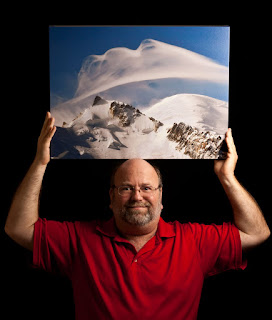 Until next time,
-Gary Friedman