Also in this issue:
Wireless Flash saves RBL – Again
Field Workshops can always be a challenge, especially since you can’t always guarantee good weather (and these things have to be planned many months in advance).  So here we were at a most wonderful place for photographers – an old tractor museum in Lethbridge, Alberta which provided no shortage of very old and visually interesting opportunities for a photographer.  The participants’ challenge: to use the rules of composition to make a compelling image that would make a disinterested 3rd party who wasn’t there say, “Wow!”.
Tough job when you have RBL (Really Bad Light).  Often when that happens you can either augment the bad light with a little dramatic wireless flash or look a little harder for a good subject – one that is a little smaller, a little closer; one that doesn’t require that the sky be in the shot.
For the above shot I chose the first option.  I decided that the ancient threshing machine (used to separate the grain from the stalks and husks) by itself was not a compelling enough subject, and so I started talking to one of the museum’s curators, Herman Siemens, who actually used this machine in his youth.  He agreed to have his picture taken in front of the machine to give it a human interest.
First I shot it straight using only existing light: 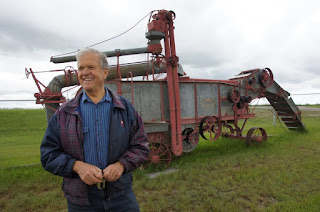 Then I had one of the participants hold my wireless flash just out of frame on the left, locked exposure on the sky (to make the sky come out 18% grey and make the rest of the image render darkly), and took this one shot.  Drama!  All on program mode; all with TTL Flash metering: 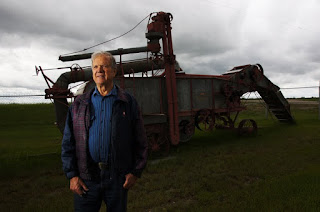 Hitting the 'playback' button while outside still left me with some uncertainty – it looked a little dark, and the histogram display told me only that there was detail in the shadows, but I wasn’t sure if the background on the whole was too underexposed.  So I covered my bases and set the exposure compensation (which affected only the amount of ambient light entering the camera; not the amount of flash coming from the wireless) to +0.7 and shot again: 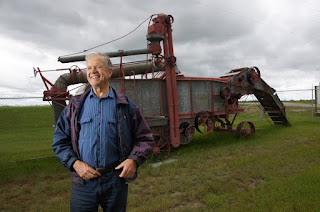 Looked better in the field, so I stopped.  When I got back to my computer I decided the first wireless flash shot was actually the best and so that’s the one I showed during the Show & Tell portion at the end of the day.  Voila!
What makes the Field Workshops so Special?
During the Boston Field Workshop in May I heard a story from one participant who attended a similar event hosted by a large regional photo club.  “It was awful!” he said, explaining, “Everyone there just lined up their tripods and took their shots.  Nobody talked to one another.  There was no camaraderie or support at all!”  He shared this story as a prelude to his remark that my seminars and field workshops are completely the opposite of that experience.  For some reason, only friendly people are drawn to my seminars. :-)  And I create the kind of supportive environment that encourages people to share their best ideas and challenge others to better them creatively.  By the time the day was over in Boston, everyone was exchanging email addresses and inviting one another over for an informal shooting weekend.  “If you’re ever in Connecticut, look me up and we’ll go out shooting!”
What is it that I do to produce such a polar-opposite environment for the Friedman Archives participants?  Well, I can’t exactly say, but I can tell you that it’s consistent and I continue to get email from people years after they took my courses saying how much they enjoyed it and how it still has an impact on the way they photograph today.  These are people who tried other photo seminars but were left wanting.  Makes me feel like Oprah.  I’m glad I can provide that kind of environment, one that eschews brand snobbery and replaces it with the joy of being creative, regardless of the kind of camera you have (even if you have a point-and-shoot, as a few Boston participants had!).
Below are some examples of shots taken by participants in Boston and in Lethbridge.  (Click on any image to view a larger version.) 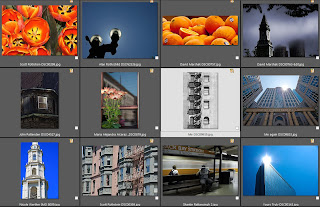 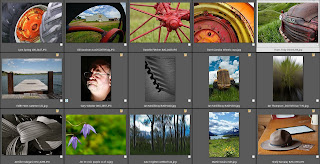 One thing everyone seemed to agree upon is that they all had a fun time, free of complaining by unsupportive family members.  Everyone was there to explore, support each other, and use whatever cameras they had to make compelling images.
The seminar schedule for the rest of the year appears below.  Notice that Nashville has been added to the schedule on October 1-2.  If you live in the area, come join the fun!  (And if you don’t live in the area, don’t let that stop you – I’ve had people come from five states away to attend my seminars.  One person even flew in from Australia (although to be truthful he was a pilot and he just adjusted his schedule so he would be in town anyway.  But that tidbit ruins a perfectly good story.)
New Products Finally Available

As promised last month, a user-friendly version of my Wireless Flash talk in Malaysia is now available!  Check out this 5-minute preview:
This 50-minute presentation is being offered as both an instantly-downloadable video file (only USD $9.95), or as a physical DVD that is mailed to your door (just $15.95 plus shipping).  Learn more and download your copy now at http://friedmanarchives.com/wireless_flash!
Also the Sony A33 / A55 ebook is now available in Spanish:  http://friedmanarchives.com/alpha55/SP-A55-index.htm
Updates to Existing Ebooks
As most of you have probably heard by now, Sony has released a firmware update for its NEX cameras and for the A33 and A55 cameras which add some new features.  They have also announced two new editions of those cameras: the NEX C3, and the Alpha 35 camera.
To everyone who has written to me asking if I will be updating my books to cover the new functionality of the new firmware, the answer is YES and you’ll all be getting free copies of the new .pdf file once they’re finished.  If you've purchased either of those ebooks, you'll be automatically notified when the new editions are released.  (Also, any NEX 3 or 5 owners who'd like to help me expedite the process, please contact me at Gary@FriedmanArchives.com).
Photo Blogs of Note
In the olden days some people would start off their work day reading the morning paper.  Nowadays it seems we all go to the internet and read the morning aggregated news feeds instead.
What’s on my newsreader feed?  Here are some photo-related blogs that I feel are so worthwhile that they deserve your attention:
Have your own favorites not listed here?  There are probably a gazillion others.  Feel free to share them all in the ‘comments’ section below (or on the blog page if you’re seeing this in a newsreader).
Until next time...
Yours truly, Gary Friedman
================ Learn how to take "Wow!"-type images the NASA way! http://www.FriedmanArchives.com/seminars
at June 24, 2011