Where the Anti-jpg bias came from - Part 2 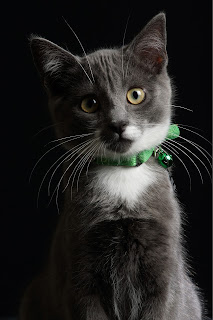 I’m writing this from Durango, Colorado, where I’ve been asked by the local photo club to come and give a seminar and field workshop (which were quite successful, but I'll get to that later. :-) )

A few days before the event, the club’s president, Howard Rachlin, invited me to be guest speaker for the photo club.  “Why don’t you give a talk about your blog post, describing “Where the Anti-JPG bias came from”?  There are a lot of strong opinions about that in the club and I think with the way you explain things you might open a few eyes.”

So I did, but since I would be presenting in front of a live audience, I wanted to do something that would blow the audience away.  So I went into the studio and took a shot that would be the acid test of .jpg image quality: A high-frequency subject (lots of strong whites and blacks in close proximity) with a macro lens (which tend to be the sharpest lenses) with good side light (which makes everything look sharper).  The best of conditions.  My idea was to shoot RAW + JPG, have both made into poster-sized enlargements, and have people scrutinize them.  Could they tell which one was the .jpg?


My subject would be our new cat, Oliver, which we adopted from a rescue society a few months ago.  The image I wanted to show appears at the top of the blog.  (A hard shot to take, since this kitten never sits still!)  But a little pixel peeping revealed that the fur on the face wasn’t as sharp as I know my equipment could produce, and so I shot it again, this time I had my wife Carol hold the cat on the table.  Yes, you can see parts of her hand there, so the “art” aspect of the shot isn’t as pure, but hey – this is a scientific comparison!  You can download the originals here and examine them both for yourself. 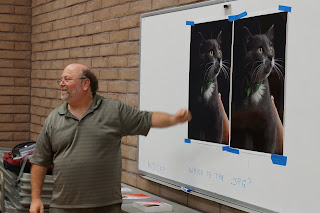 To my surprise, the posters were NOT identical.  To be more specific, the poster made from the RAW file looked worse.  (I had exported it from Lightroom, which is famous for taking care of making the RAW look just like the .jpg by paying attention to all of the camera’s settings at the time the image was taken, and then applying those settings when you open it.)  Anyway, the RAW file needed just a touch of sharpening to make it look as good as the .jpg.  I’ll have another poster made when I get back.

After the 1-hour talk describing the benefits of RAW (and balancing it out with the unexpected benefits of shooting .jpg), people were genuinely surprised at the quality of this acid-test comparison of two images right out of the camera.  (And, this was a MEDIUM-quality .jpg!)  After a lot of surprise and murmurings (the kinds of murmurings that accompany people suddenly re-examining long-held beliefs), I dropped another bombshell:  “These posters were printed at Costco (a membership warehouse store in the states) for USD $9.95 each!”

(Now before the hate mail starts pouring in, let me reassert my position: RAW has tremendous benefits in high-ISO shooting, has greater dynamic range, and is much more malleable when editing.  I went over all of this in the talk.  But as I demonstrate in my seminars, IF your light is good, and IF your exposure is right for that light, your images won’t benefit greatly from shooting RAW - modern .jpgs are that good.  You can't see any .jpg compression artifacts in modern cameras, and those posters are great examples.  The point of the talk was that .jpg’s reputation never recovered from the bad rap it developed near the turn of the century, and it’s time to reassess their quality.)

“Your seminar is WAY better than I thought it would be!” said one attendee after just the first day.  (And he was a veteran shooter who attended many other photography classes in the past!)  Of course he meant it as a compliment; but I took it as “Clearly, I’m not promoting the seminars properly”.

So I need to stop positioning these as something for beginners, since even experienced shooters the world over claim they were worthwhile and they learned something new.  I also need to emphasize how attendees say my approach is “fresh” and “different”, and that I tackle abstract things like creativity that traditional seminars think are too difficult to teach. (“Either you’re creative, or you’re not!” say they.)  Well, the Friedman Archives seminars really are different from anything you've experienced before.

But I really don’t want this blog to become a continuous advertisement for the seminars.  (I know – it’s too late! :-) )  So I’ll just say that our next one will be taking place in London, U.K., the weekend of September 15-16th, and to secure your spot you need to sign up soon at https://friedmanarchivespress.com/seminars/london.

In addition to that, I’ll be giving a reprise of the "Where the Anti-JPG bias came from" lecture described above on Thursday night, September 13th at the Purbrook Park School in Waterlooville near Portsmouth.  Admission is £15.  For more information and to purchase tickets please visit Purbrook school's website, or just drop me an email at Purbrook at Friedman Archives dot com and let me know you’re interested in attending.

News Flash - I might be giving a seminar in Kuala Lumpur, Malaysia the weekend of October  13-14th, 2012.  Watch the schedule at www.FriedmanArchives.com/seminars for more details and email me at Gary at Friedman Archives dot com if you're interested in attending.

The Complete Guide to Sony's Alpha 37 and 57 SLT cameras (by Gary Friedman and Tony Phillips) is out!

And it's available in  .pdf, .epub, and .mobi formats, as well as printed in color and B&W.  (Choices!)  Pick up your copy now at http://friedmanarchives.com/alpha57,  and tell others about it too!

The next book WAS going to be for the Sony NEX F3 and F5.  That is, until I received a flood of emails asking if I was going to be writing about the Cyber-Shot RX-100, the best digital point-and-shoot ever made.  So I bought one and will be writing about that first.  Sony is coming out with worthwhile cameras faster than I can write about them.  Which brings me to...

The Friedman Archives is hiring!  (Well, sort of...)

Love photograhy?  Love to write and teach?  Have a thing for detail and curiosity?  (Have some spare time?)  Then The Friedman Archives wants YOU!

I'm looking for someone with which to collaborate on a handful of upcoming projects, starting with the book for the NEX F3 and F5.  Email me if you'd like more details.

(To the rest of you: Don't worry; I'm not diluting my brand.  I will have my hand and mark on every page.  I know what makes my books different and I intend to keep those qualities intact!  This latest book, for example, (plus an earlier book on the A560 / A580) was a collaborative effort with Australian photographer Tony Phillips (http://tonyphillips.org), who has the requisite qualities I'm looking for, and the jointly-written books keep the same detail and flavor (and are just as popular as) my solo works.)

One of my readers found this on a wall in a bar in Slovakia called Subway Fotka. 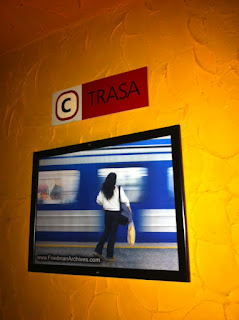 I don't know what's more impressive - the fact that they found my work compelling enough to put on their wall, or that they made a giant enlargement from the 72 dpi image on the web site and left my website / watermark there.  I could go after them, but it will probably amount to $1.47 / hr.  How principled should I be? :-)

NEXT TIME: Photographer David DeBar reveals how he gets these amazing hummingbird shots (hint: it's not just a matter of using a fast shutter speed...this was 1/250th of a second!): 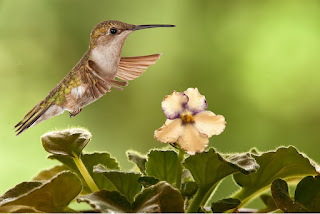