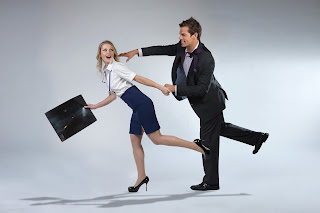 =========================
The picture you see above cost $1800.  Actually, for a professional studio shoot that’s pretty cheap.  It was produced by writer and director Greg Bowyer for his new romantic comedy called “With This Ring”.  It’s about a female surgeon who loses her engagement ring inside a notorious malpractice attorney.  I’ve read the script, and it’s brilliant.  (And, being a guy, I’m not usually a fan of romantic comedies!)

I pulled off this shot (plus about 500 others) with only 4 wireless flashes.  More detail about that in a minute.

So what was the budget for what seems to be a very simple picture?

What went into shooting it?

First, we had to determine the mood.  Because it was a lighthearted story, we decided to go with simple, non-dramatic "storybook" lighting.  This means everything should be well lit with very few shadows.  Below are two test shots - one using only one flash (dramatic, which we didn't want) and the other using two flashes, set the same distance and same intensity (no 2:1 lighting ratio for this project!).

Lighting directly effects your emotional response to movie watching - it's one important way (music is the other) of manipulating the viewing audience, which is why the title of "lighting designer" is so important in the movie industry.

To get the storybook look I used two key lights – a softbox on the right, and an umbrella on the left roughly the same distance from the actors.  (Both powered by wireless flashes.)  To light up the background, two more wireless flashes set on "wide" (28mm) were aimed at the seamless backdrop with no diffusers.  (You can see one of them going off on the ladder on the right in the shot below.)  They were adjusted so that the background was almost white but not blown out.  Because a light background will throw off the camera’s automatic exposure meter, and because the distance between the camera, actors, and flashes was never going to change, all the flashes were set to manual output – the front two for the actors (as determined by a histogram test) and the background lights about 1.5 stops brighter. 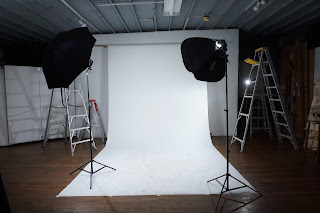 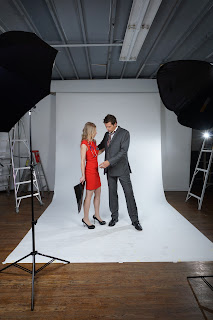 I was just one person on this crew... there were also professional hair, makeup, and wardrobe people working all night to make sure every little detail of these shots were flawless.  We went through a few dozen poses and wardrobes before the night was over.

And here is some behind-the-scenes footage:
And the final product?  (Click to see a larger image) 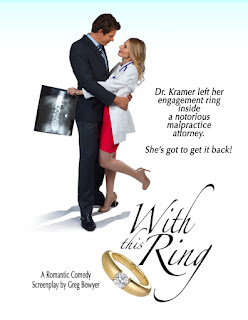 I first worked with Greg when he was directing this promotion for "First Flight" (another of his screenplays) starring Joe Mantegna.  (Promo below.  I took the behind-the-scenes stills; and we worked together so well that he dubbed me his "Photographer for Life" :-) )

Greg is still in the process of fundraising -- this $1800 photo is part of the package to pitch the idea.  If you know of anyone who'd like to help (even if it's you!), I'll put you in touch with Greg.
(Interesting footnote: See the X-ray in the poster?  It's real.  Greg taped a wedding ring to his chest and got himself X-rayed to get this prop.  Most writers / directors would have been happy to have something cooked up in Photoshop, but Greg goes the extra mile for the greatest realism.  :-) )
Next Time in Cameracraft
Feedback for Cameracraft magazine continues to flow in, and it's evenly split between "Wow!" and "I can't believe you guys are launching an old school print magazine in this day and age! (But regardless, this magazine is awesome!)".
The next issue of Cameracraft will feature an impressive 8-page spread of Iceland landscapes taken by photographer Paul Gallagher.  (Among many other articles we're still assembling.) 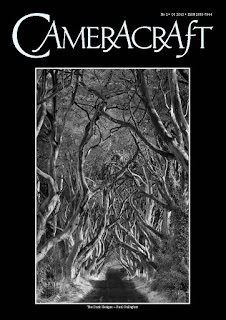 Come rally behind the cause of art and join the resistance against the establishment by subscribing to a photo magazine that seriously talks about photos (instead of, you know, gear).  More info and a link for subscribing here: http://friedmanarchives.com/cameracraft.
Brief Notes
(If you want more info about any of the items below, please fire off an email to Gary at Friedman Archives dot com.)
Deals!  Deals!  Deals!
I love a good deal, so I thought I’d share some of these with you:
15% off Portrait Professional software (http://www.portraitprofessional.com) – I just purchased this software which is great cleaning up the faces of subjects.  The software will recognize a face's features and then you can do what professional head shot retouchers do in a fraction of the time: smooth the skin, brighten and widen the eyes and mouth, give the person a nose job, tidy the hair and make the person look thinner in a believable way. It does in a few minutes what it would take me at least 30 minutes to do in Photoshop.  (Just don't get carried away -- an easy thing to do. :-) )
One of the company's attempts to have their product spread virally is to offer purchasers a 15% discount that you can “give to your friends” (all the while charging me full price.  Nice of them.)  So I hereby consider you to be my friend, and here’s a discount code if you’d like to purchase this software yourself: WXXS-KMOQ-XADT-TYVI
15% off Samyang Lenses for Sony (A and E mount)  Samyang Lenses have amazed people because they offer amazing sharpness for budget prices.  (The caveat? Manual focusing and manual aperture ring. Lots of NEX owners who love to shoot with legacy glass don’t mind this one bit.)  I own the 8mm NEX lens and just love it.  (Some people seem to be in love with the Samyang 35mm f/1.4 lens too!)
I have struck a deal with the company so my readers can receive 15% off the list price for their Sony A-mount and E-mount lenses, plus free shipping to anywhere in the world.  But this offer is only good for a limited time!  Send me an email at Gary at Friedman Archives dot com to receive a full price list and ordering details.
Photowhoa  (www.photowhoa.com) – This company offers daily deals on photo-related items.  They initially approached me asking me to link to their site as an “affiliate”, meaning if you buy from them I’ll get a cut.  Well, I’m not really interested in that, but you can visit their site directly and subscribe to their daily deals if that pleases you.
Parting Shot
Normally I spend over an hour with my subjects when I'm photographing portraits, but this was the first time I had to do it in about six minutes.  I was up in Berkeley, California and was taking this environmental portrait of singer / songwriter Robin Yukiko using one wireless flash (off to the left).  To make the image “pop” I used a dramatic lighting angle and I underexposed the ambient light by about one stop.  I like the results - subtle, sophisticated, but it doesn't scream "Hey, everybody, look at my fancy lighting!) (Unlike some other things I've shot in the past...)
Here are the steps I took to get this look:
Below is a slightly wider version of the final shot, so you can see this is all I did to acheive the desired effect.  Gotta love wireless flash!
Until next time,
Yours Truly, Gary Friedman