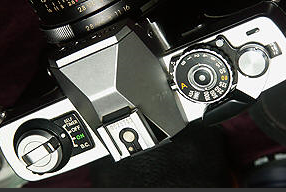 Having recently finished the book on the A330 / A380 and spending considerable time with the A550 right now, I've been living with some of the user interface design choices that the engineers have made.  I'm talking specifically about button placement.  Sony's entry-level models have been derided due to very poor placement of buttons.  If you're used to the excellent ergonomics of the Minolta 7D, or the Sony A700 and higher, where buttons were placed where your fingers naturally fall to enable you to work very quickly, you will almost certainly pick up the entry-level cameras and notice that the controls are not conveniently placed at all.  (This happens when high-end Canon users pick up their low-end cameras as well.)  What were they thinking?


Well, believe it or not, this was done on purpose.  Not to make the camera less usable, but to satisfy the needs of the entry-level DSLR buyer.  Most such buyers are used to point-and-shoots, have little knowledge of the basics of photography, and buy a DSLR with the vague goal of "taking better pictures".  Studies show that most of these folks never take the camera out of AUTO mode.  They also find the large number of features on their camera intimidating, and should they happen to press a button accidentally (as they do in focus groups), they usually panic and get flustered because they don't know what they did and they certainly don't know what to do to un-do it.  (And if they're in a focus group, they leave in a huff.)

What's a camera designer to do?  The answer: Place the buttons so that they're NOT easy to press accidentally.  That usually means putting them away from where your fingers naturally fall.  That front control wheel needs to be out of the way as well, which explains why it's placed where it is on the A330, A380, 500, and 550.  You may find many people whining about button placement on some internet discussion forums, but the cameras are not aimed at this demographic.

Now, about the on-off switch placement... Minolta could never figure out where to put an on-off switch (click on any image to make it larger): 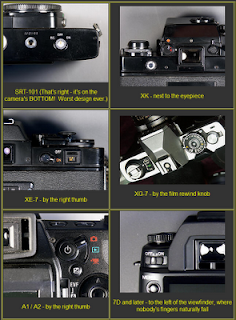 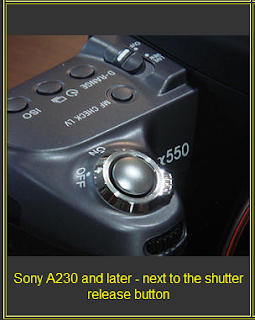