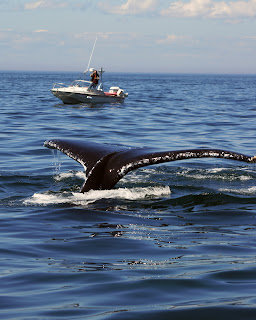 I remember thumbing through a National Geographic magazine back in the 1970’s, and came across what I thought was an insanely phenomenal picture: A two-page spread of an ocean scene; with a boat on the left page and the tail of a whale on the right half.  “Wow!” I said, “What are the chances of that scene happening just when the photographer’s camera was pointing in that direction?  And the camera just happened to be focused at the right place!”  (This was the days of manual focusing, folks…)  “This is an amazing once-in-a-lifetime shot!”
And my opinion about that shot didn’t change for over 30 years.  Then, two weeks ago, Carol and I were in Nova Scotia conducting a seminar and a 3-day workshop, and we took a day off to go whale watching off of Brier Island.  The boat was surrounded by about 3 or 4 very happy and active whales, all coming close to the boat to check us out; all of which did several gratuitous behaviors such as tail-slapping and what’s known as a “fluke-up dive”.  And you know what?  The whales moved in such a way that I actually had plenty of warning for these events.  I could normally see their blowhole and their dorsal fins, and I could see when they would start their dive.  I knew where to point the camera and where to pre-focus (although my autofocus would have handled it just fine).  It wasn’t as much a matter of luck as I had once thought.  My opinion of National Geographic photographers, once again, got cut down another notch. :-)

On the trip I got at least 8 or 9 different whale tale shots, which were nice but pretty generic.  I kept asking myself, “How can I make it better?  How can I make it better?”  (Which is what I always do out in the field.)  In this case “Get another boat in the shot for context and scale, and place each according to the rule of thirds!”  (Of course I didn’t actually say this to myself, I just kind of thought it.)  Voila!

What else Happened in Nova Scotia?

The whale watching trip was just the icing on the cake for what was otherwise a very busy and very successful trip, where I conducted not one, but TWO photographic events.  The first was a seminar in Truro, which was well-attended and well received. 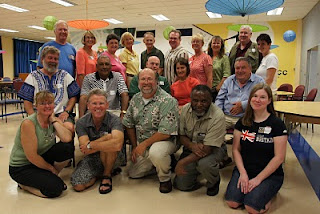 But that’s what happened last year in Nova Scotia.  The seminar was well-attended and well-received.  It was so well-received, in fact, that the attendees said, “When are you coming back?  We want more time in the field to practice what we’ve learned!”

And so I came back.  And this time I worked closely with Sue Hutchins, the local photo club leader who helped me put together a 3-day workshop which encompassed a myriad of shooting situations – from a graveyard to a triathlon to a rose garden to a horse ranch to a lobster fishing village to a bunch of houses out in the middle of nowhere.  The night before we began I held a brief lecture going over the basics; then in the field I’d go over some thoughts and ideas and then let everyone explore and be creative, with the emphasis of sharing ideas and trying to improve upon them.  (This was NOT a competition!)  In the evening people would sort / edit / tweak their images and then we had a slide show of the day’s best shots.  Great practice.  Safe environment.

So how did it go?  Let me share with you some of the images shot by the participants (click on the image to see it bigger). 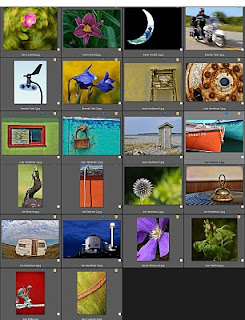 (This was only a small sampling of the work done that weekend, BTW.  How did I select which ones to present?  I did it in about two minutes, using the “take-off-your-eyeglasses-and-look-at-thumbnails-approach” as described in last year’s blog entry.)
Can I take credit for the beautiful creative output of the workshop participants?  No.  Can I be proud that I had broken down the elements of composition and reinforced the basics of what makes a “good” shot, then provided a safe environment for the participants to explore, be creative, support each other, and try to take an idea and improve upon it?  Oh, yes!  Everyone had such a good time, in fact, that by the end of the third day they asked “When are you coming back?  We love this and want to do it some more!”

And so we have been invited back next year to romp around some more in August, 2011.  This is in addition to other seminars which are scheduled for London, Vancouver, Albuquerque, Boston, California, and maybe even a few others in 2011.  Please let me know if you’d like to be notified of details! 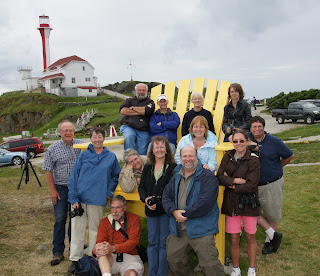 Plan For the Rest of the Year

No more trips.  At least not until January.  And it’s not because we’re lazy.  We have to help our kids move.  We have not one, but TWO more grandchildren on the way.  And, I have four more books to write before the end of the year: