Sharper Pictures from your Camera Phone

My father-in-law passed away a little over a week ago.  He did so on his own terms - at home, surrounded by people who loved him.  He was a great man. 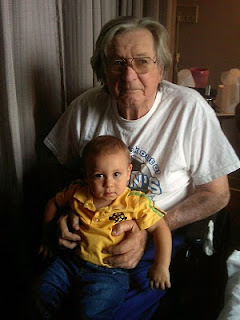 For the funeral I was tasked on assembling a slide show of his life, consisting of scans of old snapshots and other media.  Two of the images caught my attention - they were both taken with my cell phone camera, but the apparent quality of one image seemed superior to another.

"What?  You use a cell phone camera?" I hear you ask?  Well, it's true that I just don't schlep around my A550 everywhere (which has now become my favorite everyday camera).  Usually I keep my ancient Sony T10 in my pocket, because as I mention in my seminars, the camera you have with you is infinitely more valuable than the expensive one you left at home because it was too bulky.
Sometimes I don't even have the T10, for example when I was in synagogue a few years ago and I saw this wonderful picture of my father-in-law with his great-grandson sitting on his knee.  Normally the rule is that you're not supposed to take pictures in a synagogue, especially during services.  "Nuts to that!" I said, and pulled out my camera phone and took the picture below.  The light was bad, but the picture is priceless.  This is the main function of a snapshot - it is designed to jog a neuron of shared experience in the viewer; not necessarily to make a disinterested party go "Wow!". 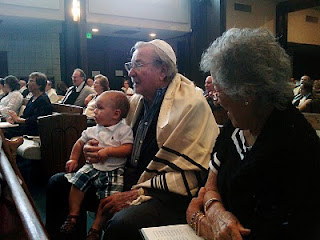 So both of these pictures (above and at the very top of the blog) were taken with the same camera phone, same lens, same f/stop (there's only one setting in these things!)  Now click on each picture to see a larger version.  Notice how much sharper the first image appears to be!  (It also has way fewer .jpg compression artifacts...)
What's going on?  Simple: The good shot had better light.  More specifically, it had directional light - a strong, harsher light source coming from the side.  Directional light will improve your picture quality (and apparent sharpness) like nothing else.  Even in a cell phone camera.
This is an important lesson, especially if you're a new full-frame camera owner.  I get so many emails from new A900 owners asking if their camera is defective, since they can't seem to get the kind of Leica-esque sharpness that they expected.  Then they'll send me a sample photo taken in really bad light, 1/30th of a second handheld, f/stop wide open and with a moving subject.  Well, of course it won't be sharp!  In order to get sharp pictures you have to be firing on all eight cylinders: good light, good light, small f/stop, no movement, good light, detail in the subject, and good light.  (The picture below is a really good example.) 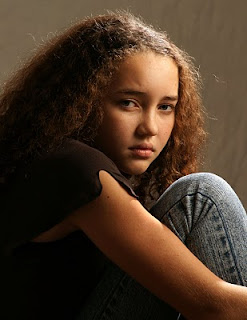