A Tale of Two Portraits 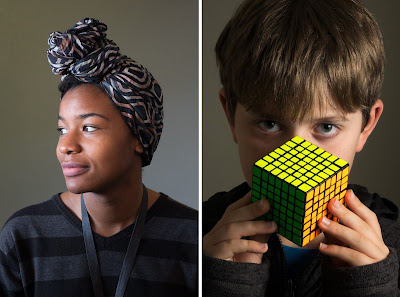 
A Tale of Two Portraits

Neither one of these portraits at the top of this blog was done in a studio. The first used natural light (something I'm always on the lookout for), and the other used The 5 Dollar Studio which I blogged about a few years ago.

Below you can see the setup for the first shot - there's a large room with large windows.  My subject was sitting right there working at her computer.  After taking this behind-the-scenes shot, I moved in front of her, zoomed in to about 200mm, and took the portrait.  Everything was on Auto.

Next was a portrait of a Rubik's Cube enthusiast. (And before you ask, yes, that's a real 7x7 cube.)  Here I had some volunteers hold a wireless flash and a diffusing cloth to the right of the subject, just out of frame.


(Check out the video at the bottom of this page for an impressive demonstration of this kid solving 13 Rubik's Cubes of various dimensions in a mere 15 minutes.)

Free Update for the Olympus E-M1 firmware version 4 -  Olympus added a ton of new features with this update - features that usually require upgraded hardware, so I was duly impressed with their engineering team.  If you purchased the ebook from my website you should have received the free update automatically.  If not, email me your purchase receipt and I'll send you a download link.

No new seminars are being planned right now, as we are anticipating another major family event.  If you're still interested in a refreshingly different way to approach great photography using whatever camera you have that doesn't rely on equipment envy, check out the streaming version of The Friedman Archives Seminars which you can view in the comfort of your home.  Much cheaper than buying a new lens, and your approach to photography will never be the same again!

Many of you have been hearing me talk about f2 Cameracraft magazine ever since its inception more than 3 years ago.  And although you may have heard many good things about it from other subsubscribers, you may still be on the fence regarding subscribing.

For you, editor David Kilpatrick and I are giving away a free (FREE!) downloadable .pdf of the January / February 2016 issue!  (Trust me, this took a lot of convincing. :-) )

So if you've been on the fence all this time, be fence-ridden no more!   Take a break from all the incessant talk recently about overpriced lenses and dip into the real meaning of photography.  I still consider this to be some of the most important work I do.


The Nissin Di700a Review I'm Not Going to Write 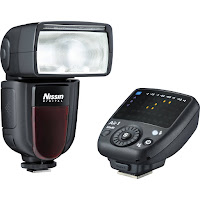 Late last year Nissin made every Sony flash shooter happy by coming out with a radio-controlled TTL flash that was designed to work with Sony's infamous MiS hot shoe.  And the demand was so great that I had to put my name on a waiting list just to get my hands on a pair.  Imagine - more capability and half the price of Sony's best flash!

Yes, I was going to tell you about all of that... then I took this picture with that flash during a studio session: 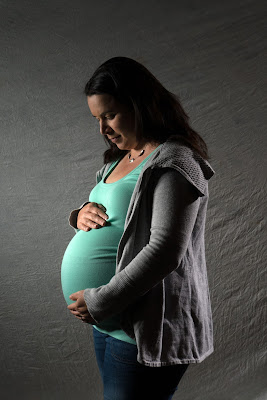 After that, the flash wouldn't fire in radio mode at all.  It just stopped communicating with the transmitter, and nothing I tried could fix it.  Fortunately I am familiar with Friedman's Law of Technology, which states that all technology will fail, and when it does it will fail catastrophically.  Your only hope is redundancy.  (Especially out in the field.)  And so I relied upon other flashes to finish the session.

A quick call to Minox USA (the local distributor for Nissin) revealed the following insight: "Oh, we have new firmware for that unit.  Send it in to us and we'll update it for you."  No word at all regarding what previously identified problems the firmware fix fixes - companies never tell you that since you might discover the product was worse than you initially thought.  So I sent it in and am waiting for it to come back.  But now I have to start evaluating it all over again.  (Sheesh!)  I think the next time I'll talk about this is when the Phottix Odin TTL II flash triggers for Sony officially ship sometime this spring.  I'll buy a pair of those too and do a report on both.

An Ideal Platform for Those Learning Photography

It boggles the mind that there are really only 4 variables in photography: shutter speed, f/stop, ISO, and focal length.  That's all you ever had to worry about with manual cameras from the 1950's.  Yet modern cameras with all their technology have made things infinitely more complex instead of simpler.

I was reminded of this fact when I heard a local high school was looking for donations for classic manual cameras for their beginning photography classes: Nikon FM (1/2/10), Pentax K1000, Minolta SRT-x0x, Canon FTb, Olympus OM-1, and others from that era.  Modern cameras were not welcome.  Is that wise?

Rightly or wrongly, there is a hipster factor in learning photography by using film.  But if your goal is to teach in a meaningful and intuitive way, I feel they're going about it wrongly.  Digital is the way to go for its instant feedback - learning happens faster that way, especially with the ability to preview how your shot will come out via Live View as you change your variables.  Old-school ideas like Film and darkrooms should be relegated to graduate school.  Do we teach driving by having students learn to ride a horse first?

There are precious few digital cameras that lend themselves to teaching the basics in this way. An ideal camera in my mind was the now-discontinued Epson R-D1, which was essentially a digital Leica M body.  Modern cameras such as the Fujifilm X100s and the digital Leica M typ 262 cameras come close.  (And ironically the Leicas are pretty much out of reach for most beginners.)

So my first thought was to start a Kickstarter project to get something like a modern version of the R-D1 in production again.  But that's difficult to do, and M-mount lenses can still be expensive.

"Dude, most cameras have a manual exposure mode.  Why not just tell students to use that?"

If you've ever been a complete novice you'll know the answer right away: There is too much to learn just so you can know what to ignore or disable.  It's an impure experience.

Then I thought of utilizing the fact that some modern and affordable cameras (I'm thinking of the Sony A6000 here) can run apps that you can download to provide new features.  Why not create an app that turns a modern, affordable camera into a basic camera with basic controls and an extremely streamlined menu system?  You'll be essentially removing all the non-essential bells and whistles so the user can concentrate just on the fundamentals.

Sounds like a simple idea until you start thinking about the implementation details:

Anyone who says "Make them all menu-selectable options" is adding to the complexity which is exactly the opposite of this platform's goals.  Anyway, there's a lot to consider.

I think Sony would sell a ton of cameras to a new serious beginner demographic if such an app were to become available.  Better yet, build that functionality into a body like the A3000 (which sold well at big-box stores) and extend that model's sales life by 20 years.  There are always students learning.  This can be your Pentax K1000.

Unfortunately there's no development platform / API / inclusion program I know of that would allow me as a 3rd party to develop and sell such an app.  And so I put the idea out there so hopefully others can run with it.


I talked about this a little earlier.  Once I saw how amazing this Rubik's Cube kid was I had to take his portrait.  But that doesn't do justice to his skill, and so here's a very amateur-looking video showing how he solves 13 Rubik's Cubes of various sizes (including that 7x7 one in the portrait) in only 15 minutes - all done in one continuous shot: