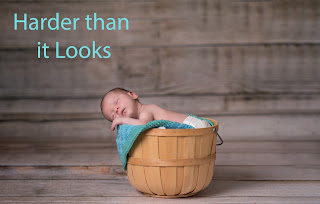 Ever since Anne Geddes raised the bar on the newborn photography genre, an entire legion of people shooting newborns in this style has arisen.  And this seemingly simple style of photography is considerably harder than it looks.  Not only do you have fussy subjects, narrow windows in which to get the shot, uncooperative siblings (for family shots), and un-photogenic skin, but you also have extremely high expectations from your clients.  Unlike  traditional portrait photography, you can't always guarantee that perfect photo.

Problem #1: Dark, reddish / purplish skin.  (Click on any of these example for a larger view) 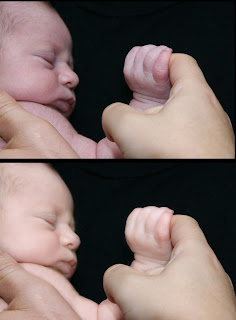 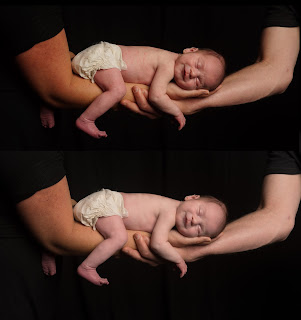 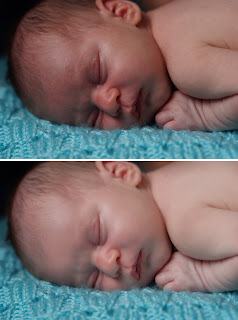 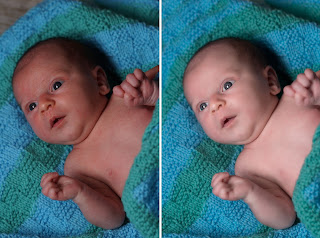 Before Photoshop, the problems of unphotographable skin was usually handled by shooting in black and white.  When shooting Caucasian babies, a red filter was often added to make the skin look whiter. 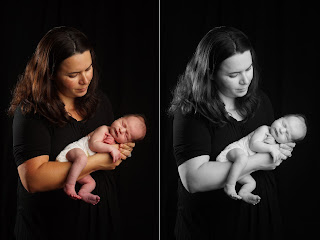 Today this same red filter effect can be emulated in Photoshop.  When using the Image --> Adjustments --> Black & White... feature, move the red and yellow sliders to the right a little to get this classic Hollywood "look".

So that's one way.  But if you want color photos, you can either spend tens of minutes tweaking each image in Photoshop or Lightroom (after having learned how to do it), or you can spring for some commercial-off-the-shelf tools that can help you achieve the same effect while spending considerably less time.  I'm going to recommend two such tools below that are actually useful (and one of them is free!).

There's a photoblogger named Rita who runs TheCoffeeShopBlog.com from her home in Texas.  One of her claims to fame are the free photoshop actions she creates.  I found one of them very useful for cleaning up the skin of newborns: The "Coffeeshop Baby PowderRoom" collection, which you can download from here:

(Instructions are provided as well.  She has many other actions available too; browse around!) 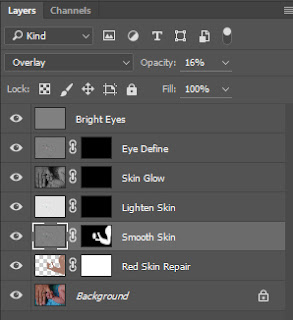 Basically, when you open your file and run the action, it creates 6 new adjustment layers on top of the background layer.  You then use the brush tool on the mask to "paint" in the desired effect on your image; then adjust the layer's transparency to taste.  It works wonderfully, taking the process down to about 3 minutes per image.  I processed all of the above examples using this tool.

If you're doing this for a living, you might want to go for something that might speed up the workflow even more.  And "Speeding up workflow" is what Lightroom is all about, but do NOT make the mistake of just installing 1,300 baby photo presets and pray that one of them will work on the image that you have.  The problem with presets is you can't selectively apply an effect to part of an image; it gets applied to the whole thing.  What you need to look for instead are presets that can be applied via the adjustment brush so you can, for example, only smooth the skin on parts that don't include the eyes or mouth.  Here is such a package; it allows you to do skin softening, lightening, and red (rash) removal all via the adjustment brush.  And for a scant USD $50, it's quite a bargain: 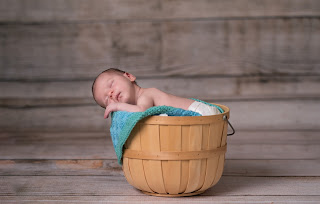 Now, then, the hardest part.  Lighting for shots like the above is not obvious.  The earlier shots on this page were done with one softbox and a black background, and for most portraiture the rule is that the larger the softbox, the softer the light.

But for newborns, that doesn't work as well as you'd think.  The light, as well as the shadows, are still strong and it has to be softened yet further.  So you need to start with a large light source, and then light the newborn using the very edge of the light.  Not only does this provide softer light, but also less light, great for those photographers who like to show off shallow depth-of-field with their f/1.4 lens.

This technique is called feathering, and yes, it requires that you waste 99.9% of the light from your expensive softbox.  That's why large reflecting surfaces are required as well, to bounce back some of the wasted light and fill in the shadows.  Below are some test shots, plus a wide shot showing the light setup.  The large softbox is actually 3 feet in front of the newborn, so only the edge of the light is hitting him.

We won't be doing a lot of seminars this year because other projects will be usurping my time (especially this summer).  However, we will be doing one in Halifax, Nova Scotia, Canada on May 21-22, 2016!  And the early sign-up discount has been extended to April 5th!

If you're not happy with your photographs and find yourself chasing exotic equipment to fix the problem, then this course will change your photography forever.  If you can't make the Halifax event you can now stream a condensed version of the 2-day course in the comfort of your own home!

New ebooks are in the works for the Sony A6300, and the Fujifilm X-Pro2 by Tony Phillips.  Please send an email to Gary at Friedman Archives dot com to be notified when they're ready!

Next Time in f2 Cameracraft 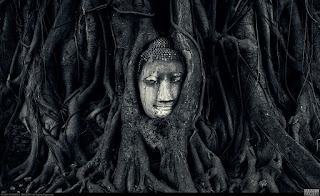 You know all those magazine articles that tell about some high-falutin’ photographer traveling the world and taking awesome images, enjoying all that life has to offer, all the while you’re sitting there and just reading a magazine?  Well, this story is nothing like that.  This is the story of one man’s journey to become that photographer overnight, which involves work, sacrifice, taking on significant amounts of debt, and basically doing absolutely whatever it takes (including learning how to be a businessman).  It’s not at all easy.  And he hasn’t succeeded yet.  But his work is totally awesome! 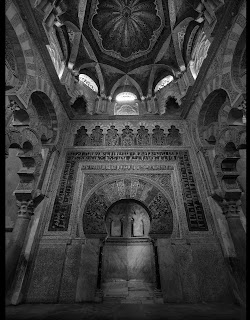 
I discovered something somewhat annoying about a month ago while shooting athletes running toward the camera using the Sony A7R II and the Sony 55-210 E-mount lens.  (I used the A7R II because my A6300 hadn't arrived yet.  And I used the 55-210 lens because that's most A6300 owners are likely to buy.)

Here are the settings I used:
These are ideal settings for shooing sports and getting a high yield of sharp pictures.  But imagine my frustration when I discovered that the camera WOULD NOT TAKE PICTURES OR EVEN TRY TO FOCUS while I was turning the lens' zoom ring - a necessary adjustment when an athlete is running toward you!

My first thought was "this is the proper thing to do with a varifocal lens - your focusing changes while you zoom and so it's easiest to just stop trying until the zooming stops".

Then the A6300 showed up.  It worked perfectly, using the same lens and the same settings!

Go figure.  I'm not sure what caused the original problem... A bug in the A7R II?  A quick inquiry on dpreview revealed that it didn't seem to happen with the high-end FE lenses with the same settings.  I need more data to really know for sure.

So here's an opportunity for you.  Please see if you can duplicate the problem as described above using the equipment you have, and please report your results in the comments, including your equipment and firmware versions.  This is for E-mount cameras only.  Thanks for taking the time!

Here's a slow-motion video tracking a moving athlete using the A6300 and 55-210 E-mount lens, showing off the camera's 120 frames-per-second video mode.  Notice how the camera keeps tracking the subject even though an adult gets in the way about 15 seconds into the video clip.

This is not the first Sony to be able to do this.  Any camera with the AF Track Sens function in the menu can do this too.  It's a very handy feature.

P.S. - Oh, yeah, the most important secret of all for newborn photography: GET A SPACE HEATER!  Those little ones get cold rather quickly when they're not wrapped snugly in a blanket. :-)