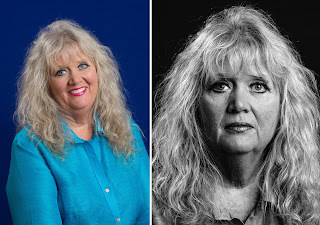 I had a most unusual request recently - a mother-daughter pair came in for some head shots.  The mother had recently been cast in a movie, and was told there was a market for older actresses (something I had never heard coming out of Hollywood!  On the other hand, she was from Arkansas).  Could I take some photos to make her look old?

Nobody ever asks that.  I told her I could, and we went to work.

First, the mother-daughter shots (click on any image to make it larger):

Then I used every trick in the book to try to make her look old.  What were all those tricks, you ask?

Trick #1: Start with a photo where she wasn't smiling.  Convert to B&W, since B&W shots always look depressing.  Here I used Photoshop's Image --> Adjustments --> B&W... control and I adjusted some of the sliders to make certain colors render certain shades of grey. 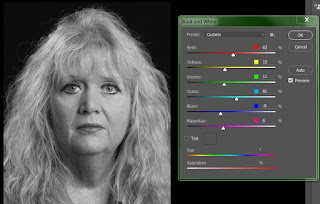 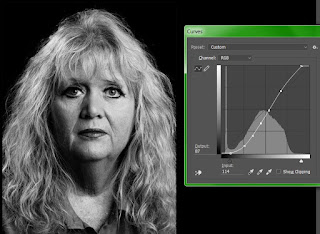 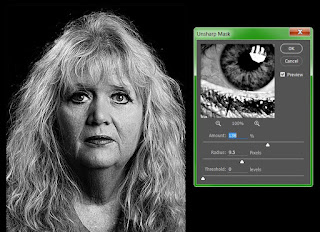 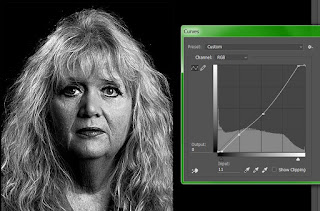 (I'm sure you will all find this technique very useful in your future portraiture work. :-) )

After the session ended, I got an additional request: "I want this picture of my daughter on my desk.  Can you get rid of her nose ring and clean up her complexion?" 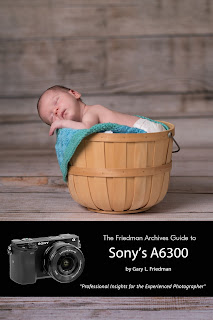 The ebook for the Sony Alpha 6300 is now out!  Instantly-downloadable .pdf and printed versions available now, with .epub and .mobi versions due late June.

The ebook for the Fujifilm X-Pro2 by Tony Phillips is now just weeks away!  Email me at Gary at Friedman Archives dot com if you'd like to be notified when it's ready.

Looking for an author to cover Lumix MFT cameras.  Contact me for details.

No seminars are in the works due to a large project I'm working on this summer.  But if you find yourself overwhelmed by just how much there is to learn in digital photography, THIS SEMINAR IS FOR YOU.  It cuts through all the clutter and spells out, in a clear and intuitive way, what's really important and provides everything you need to know to take "Wow!" type images right away.  Many have testified that their understanding has crystalized and their photos improved immediately.  And now, you can now "attend" a pre-recorded seminar from the comfort of your home!

We will likely plan a seminar for Fall, and are open to suggestions as to where.  To help facilitate that, I'm offering to speak at your photo club for free!  Email me for more details. :-) 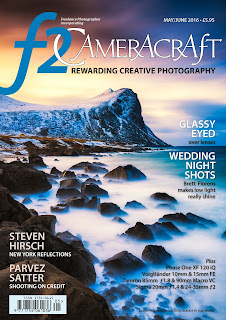 One of the things I really liked at my days at NASA was the fact that I was always surrounded by people who were smarter than me.  Sure, I had my own unique strengths – I was one of very few people there who understood both hardware and software on the bit level, which meant I could optimize systems designs better than most, but what really energized me was interacting with a lot of the space scientists.  I got to meet Dr. Carl Sagan and Dr. Freeman Dyson; and Dr. James Van Allen for whom the Van Allen radiation belts were named.  Those were fun days.

I feel the same way about myself as a photographer.  Yes, I’m pretty good, but there are plenty out there who are better, and I get to talk with a lot of them when I write up features for f2 Cameracraft magazine.  Great photography doesn’t come from having a great camera; it comes with vision and f2 Cameracraft shows off the best we are able to find.

I also think I’m pretty good when it comes to the technical side of photography, but that pales in comparison to David Kilpatrick, legendary magazine publisher and current operator of PhotoClubAlpha.com and f2 Cameracraft publisher.  Just in the past two months alone he’s provided so many insights to the new expensive optics craze that you absolutely won’t find anywhere else.  Here’s a sampling:

And this was just within the past few months!  One of my favorite Cameracraft articles he did was a thorough research piece he did on the multi-coating used on lens filters, and which companies actually had coatings that made a meaningful difference.  Where else do you find this level of detail?

100 years from now, I believe that f2 Cameracraft magazine will be deemed to be the most important thing I’ve done in the photographic realm.  Subscribe now and be the proud owner of a future collector’s item!  Worldwide subscriptions by fast airmail, premium ultra-heavy print quality and the best of British printing technology (it even smells good).  (Editor’s note: David wrote that last nugget. :-) ) 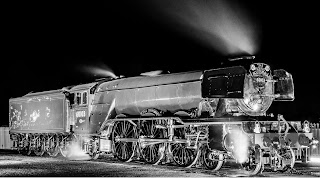 In the current issue, photographer Ian Cook explains how he got these shots of the resurrected "The Flying Scotsman" steam engine using only a few banks of LED lights and a lot of patience.  (That's using a lot less gear than what it took in the old days!)

One final note: Back issues of the magazine are now available as downloadble .pdfs!  (Just don't look at the picture of the half-naked woman on the cover of item #15.)

Why Americans Behave the Way They Do

[Editor's note: This has nothing to do with photography.  But this had a large impact on me and so I felt compelled to share the gift of sight.  GF]

Sometimes in life you come across things that completely change the way you see the world.  In the world of business, it was the book "Crossing the Chasm", where I learned that we were lied to in kindergarten about building better mousetraps.  (Every inventor needs to read that book!)  In the world of cinema, it was the art movie Koyaanisqatsi (and its sequels) which changed my view of civilization and how we live our lives.  Deepak Chopra's "The Seven Spiritual Laws of Success" taught me the stress-relieving power of working toward your goals while at the same time letting go of the outcome.

Long before those, I happened upon a paper which had an even larger impact on me back in 1988, when I was preparing to visit what was then the Soviet Union.  While doing my homework (studying history, and learning as much of the Russian language as I could, in order to become a proper ambassador), I came across a paper written by an agent of the State Department, explaining to foreign visitors why Americans act so strangely.  This was not the kind of American-bashing treatise like we see so often on the internet; it was a serious paper which set out to explain the 13 Values Americans Live By.  If a behavior seems strange to you, understanding the underlying values which were responsible for that behavior can lead to greater understanding of a foreign culture.  A quick excerpt:

For example, when you ask Americans for directions to get to a particular address in their own city, they may explain, in great detail, how you can get there on your own, but may never even consider walking two city blocks with you to lead you to the place. Some foreign visitors have interpreted this sort of action as showing Americans’ "unfriendliness." We would suggest, instead, that the self-help concept (value number 6 on our list), is so strong in Americans that they firmly believe that no adult would ever want, even temporarily, to be dependent on another. Also, their future orientation (value 8) makes Americans think it is better to prepare you to find other addresses on your own in the future.

If you are an American, this may allow you to see yourself differently.  If you're not an American, this may explain a lot of behaviors for which Americans are traditionally criticized, rightly or wrongly.  Here's the paper - it's a short read.  For me it changed how I saw myself in the world and helped me become a cultural ambassador, both with my camera and with my attitudes.