The Value of Immediacy 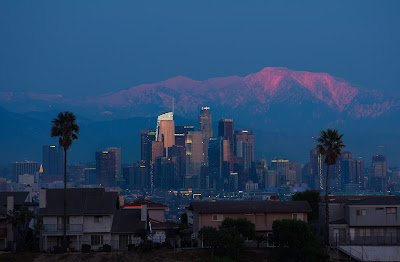 Also in This Edition

I'm intentionally not the most knowledgeable at Photoshop.  (I prefer to control my light instead.)  And so when I learn something really obscure I like to share it.

It started out with this modest portrait of downtown Los Angeles which I posted on Facebook: 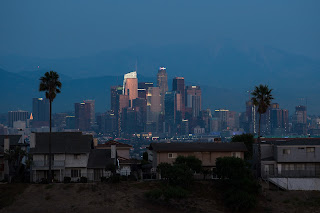 Someone commented on that photo, saying I was there a bit too late.  I said "No, I've been waiting for about 90 minutes for the right light which never really arrived", and to prove it I uploaded this picture I had taken earlier:

Then a friend, Stuart Lee Friedman, who had taken my seminar in New York but we didn't realize we were related until years later, took those two pictures and produced this beautiful hybrid: 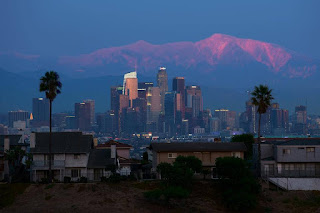 "Wow!" I said to myself.  "That looks great."  But how did he do it?  Every effort I made to try to duplicate what he had done looked awful - I couldn't match the color, and everything I tried left masking artifacts around the tops of the buildings.  We spoke a few days later and he explained the secret.

1) First, he copied the lighter picture and pasted it as a new layer on top of the darker one.

2) He then did a quick selection of the mountains.  (In this instance, it doesn't have to be exact.) 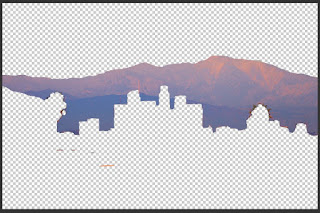 3) Then he set the Blend Mode to "Pin Light" 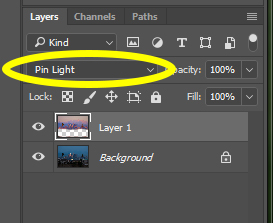 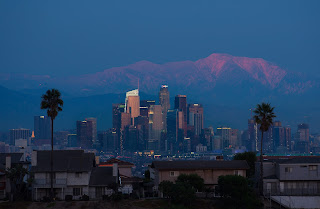 Then he tweaked the layer to taste (in this case increasing the saturation.)

Plans for 2018 are starting to congeal.  If you're interested in any of these send me an email to Gary at Friedman Archives dot com.
In the planning stages:  Bedford, Massachusetts


The Value of Immediacy

It was really dark in the wedding reception hall.  Hardly any light at all.  All the guests were shooting away with their smartphones, getting poor-quality photos in the poorest of conditions.  Many then posted these images to Facebook as the event was occurring.

Me?  I brought my RX-100 V (I was a wedding guest, remember?) which I knew would provide much better results compared to the smartphones, given the larger sensor and f/1.8 lens.


When shooting people I've found myself in the habit of shooting continuously at about 3-5 frames per second, which helps me capture just the right expression, especially of the kids who never pose.  Later on I'd go through the images, pick out the best, and post just those.  It's just too time consuming to go through the shots in camera, pick the best, upload them via the camera's Wi-Fi connectivity, and post them from the field.  "My pictures are worth the wait!" I tell myself.

But guess what?  Normal people don't care about the difference in quality, the lower noise or the higher percentage of better expressions.  By the time I get home, find time to cull and tweak and post, the photos are already considered "stale" and tend to garner less interest.  Mine will only be of consequence to someone who is creating a photo album from the crowd-sourced input.  My images may be better (at least in my mind), but the differences are meaningless for non-photographers.  It's no different from the days when people would shoot Polaroid instant cameras at a party - those who shot with film may have produced better results a week or so later, but the value of immediacy wins out - people would rather have it fast rather than have it good.

This just reinforces what I've been saying for years, regarding the differences between a snapshot and a photograph.  A snapshot triggers a memory and doesn't have to be technically sound.  A photograph is designed to make others say "Wow!" without having the benefit of the prior experience.  Kodak understood this for decades, which is why consumers just ate up their progressively poorer film formats starting in the 1970's - first with the small 110 film format, then the horrendously smaller Disc cameras (remember those?).  Customers never noticed the poorer image quality, as they were used just to jog a neuron.  Smartphones can actually do both (with good light the new models are perfectly enlargeable).  We live in amazing times.

If you're on my email notification list then you're already familiar with the deal I've worked out with the Heaven Art Gallery.  Basically I've negotiated a great deal for you - two months of exposure for the price of one, on a special screen dedicated just to Friedman Archives subscribers!  The next deadline for the February - March time frame has been extended to January 27th.  Here's your chance to have your work displayed in an art gallery for a mere $10/image!  For more information email  info@heavenartgalleryusa.com and reference the Friedman Archives Featured Artists exhibit.