Geeking with Gary - Cloud Server on a Raspberry Pi 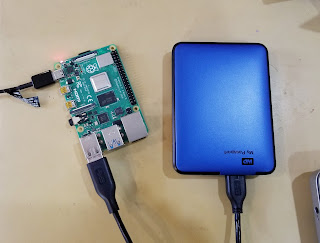 [Editor's note: This has little to do with photography.  I do this from time to time.]

Two Christmases ago someone gave me a Raspberry Pi.  You know, a full single-board computer which runs Linux and can pretty much do anything for a whopping $35 U.S. dollars.  “Hey, I’m a geek, and I hate that Dropbox' free account limits me to only three computers.  I have this single-board computer and a 2 TB hard drive lying around.  I’ll turn that little board into my own personal cloud server, so I can access my files from anywhere in the world - for free!  AND I can configure it to be my own personal Virtual Private Network (VPN) - also for free!  Muahahaha!!  What could possibly go wrong?”

I had to wait until the pandemic until I had time to actually learn to use the board, install NextCloud (tm) cloud server software (they make a version specifically for the Pi), and then figure out to have it accessible outside my router (which changes IP addresses once you pass through it).

It took me over a month to get everything working.  I won’t bore you with all the technical challenges (like the software insists on using a physical Ethernet port instead of Wi-Fi during setup, or my ISP changes external IP addresses every so often making things unreachable when I’m traveling), nor will I complain that the documentation was written by both geeks AND nerds and therefore completely unclear and scattered all across the internet.

I have about 20 pages worth of notes detailing ridiculously minute problems I ran into and their solutions.  Here are some of the highlights of the lessons learned:

Once I got all of that working, I got ambitious and installed a VPN on top of the NextCloud software and spent another 3 weeks learning and configuring the clients and poking holes in my firewall to accommodate it.

It all worked great until it didn’t.  And after 3 more weeks, I realized that I was spending my time solving never-ending technical problems instead of living my life.  I may have been a great geek in my youth, but no longer.  I stuck a crowbar in my wallet and gave Microsoft Onedrive $2 per month for 100 GB.  Always works, whether I’m home or away.  Don’t have to worry about power outages or backups.  I’m now almost the same as normal people.  (Although OneDrive's Android client is hardly bug-free - it has sync and versioning problems.  Leave it to me to be the first to discover them.)

Because of that failed experience, I’ve now abandoned my other goal of setting up my own ZFS file server (which has a self-healing file system, unlike NTFS).  This entire episode put me spiritually closer to Jerry Pournelle, Sci-Fi writer and regular columnist for BYTE magazine in the 80’s.  Nothing was ever straightforward for him, either.
===
Postscript: Since our move to Plymouth, MA, our Comcast Xfinity internet upload speed is an abysmal 1-3 Mbps - barely enough to give a Zoom lecture, and definitely insufficient to run a cloud server from.  Upgrading to the next tier of internet speed ("Gigabit internet", which I'm sure won't deliver gigabit speeds) would cost significantly more than the $2/mo I'm paying Microsoft for Onedrive hosting.  So now this project really WAS a waste of time (although I did get to relive my geeky youth for a few months, so there's that.) 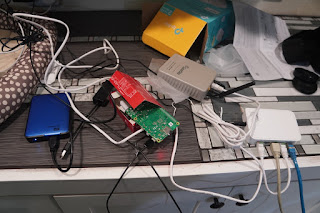