(*) Or so I was led to believe.
Also in this issue:
The Pilot I never showed you
Next Time in Cameracraft
In the Pipeline
How to make $$$ on Instagram
The pandemic was still raging.  I was still in Boston, waiting for my Sony A1 camera to arrive so I could start writing the book on it.  I guess you could say I was "between projects".  Usually when there's not much to do I read a book or two and expand my horizons.  I found one advertised online whose title promised to make a lot of money on Instagram without spending any money and not spending a lot of time.
Usually I'm skeptical of such titles whose outcomes sound too good to be true and come with a steep price.  Especially when it comes to online marketing, where every advertising dollar I've ever spent has been a wasted dollar.  But Instagram sounded like a platform worth exploring for selling camera-specific books, since many enthusiasts hashtag the camera they're using when they post.  They identify themselves.  And, unlike Facebook, you don't have to be "friends" in order to communicate with others with similar interests.  So I sprung for the book and started reading.
And the advice sounded perfectly reasonable.  The methodology went something like this: Search for posts containing certain hashtags.  Make meaningful comments (not just 'hearts') on posts made by people with small followings you think might be your target demographic.  Do this a few times; if you also have good IG posts they will likely follow you.  Follow them back.  Make sure your IG profile makes it clear what you are selling and make it easy for people to click and make a purchase.  Do this a lot and over a long period of time your number of followers will snowball.  And the sales will ultimately follow.  You don't even have to post that much - maybe 2-3 times a week.  It's the interaction with your potential customers which makes the difference.  People love reading comments about their work.
Well, I had time on my hands, so I tried it for a few months.  And sure enough, my followership (that's a word!) started to grow.
Then I stopped.
True, sales hadn't increased in any measurable way, but that wasn't the reason.  Spending all of that time on social media was negatively affecting my mental health.  I became obsessed with "how many people responded to my comments" or "How many people liked my posts".  Worse, I was becoming desensitized to the endless parade of mind-blowingly beautiful and overprocessed images.  After awhile, even jaw-droppingly beautiful images which would have been worthy of inclusion in Cameracraft magazine received a scant 1/8th of a second of eyeball time.  How do you look at all that and then think the pictures you took yesterday are worth anything?
This is not living.  So I stopped, and turned my attention to other things.  The move.  The book.  A summer science program at MIT where I'll be volunteering to teach.  Something to look forward to.
(Mind you, the Instagram experience was a billion times more pleasant than being on Facebook.  For that reason, I've whittled my FB time down to just two minutes a day.)
Next time in Cameracraft 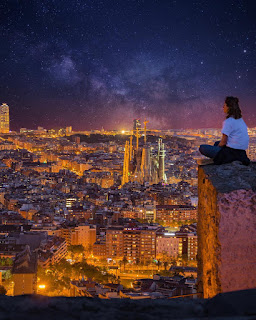 We're going to press as I write this.  In the next issue I profile Christopher Funk, who travels the world with his camera and his drone and produces amazing images ( https://www.instagram.com/christopherfunk_/ ).
Subscribe to Cameracraft magazine today and help support the last of the high quality photo magazines in production!
In the Pipeline
The Spanish translation of the A1 book will be done soon.  ¡Envíeme un correo electrónico para recibir una notificación cuando esté listo!  Gary@FriedmanArchives.com
Zoom Lecture for your Photo Club
If your photo club is still meeting virtually, don't forget I can be a remote guest lecturer for you.  Get in touch with me for more info!
The Pilot I Never Showed You
Once upon a time, cable television was a thing.  Tony Phillips (the one who writes the books on the Olympus and Fujifilm cameras) and I wanted to do something together that would both be fun, educational, and enhance our brand.
So back in 2013 Tony flew to California from Australia and after much brainstorming we came up with this, which is unfinished but we were hoping it would convey the idea enough to get financial backing for the project.  Never happened, but at least I can share it with you now:
If we were pursuing this today, it would probably be pitched as a web series, and it would involve modern smartphones (and ideally would be sponsored by the smartphone company whose products we'd be using).
Until next time,
Yours Truly, Gary Friedman
at June 19, 2021