Probably the most important thing you need in a studio is not lights nor equipment - it's empty space.  With empty space, the most dramatic images can be had with only one light.  (As always, click on each image to view larger and much sharper.)

And I never really had a lot of empty space in the old studio.  (An informal tour appeared here.)  My old studio in California was a tiny room and I often felt a little cramped.  And every time I wanted to switch from shooting videos (with continuous lights) to shooting stills (with powerful flashes and a completely incompatible set of light modifiers), it took a day to put the old equipment away and reconfigure everything.

So when we moved into a brand new house in Massachusetts, it came with an unfinished basement. 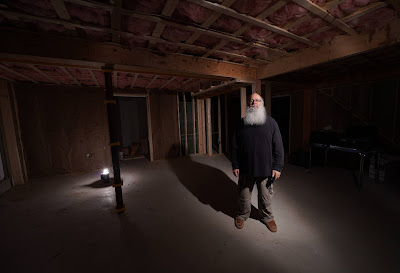 And here is the finished room in various stages of finishing.  (You can see more of it in the "before" stage via the youtube video I made about the Sony A1): 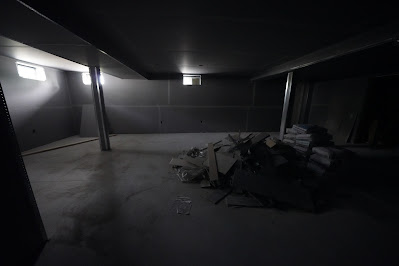 Have also been using it for Xaphoon promotional videos...  first I started simple (I kept these to under a minute because Instagram):
Then I got more ambitious (this took me 4 days!)
I also did a "holiday video" for my friends in Latvia (playing the last song from Peace Child in Latvia documentary from 1988):

And now a word from our sponsor

(Me?  An influencer?  At my age?)  The promised purchase link is here.

It will be awhile before I open the studio up for commercial portrait photography.  In the meantime it's the great lighting playground I've always wanted.

Working on the e-book for the Sony A7 IV now.  I'm liking the fact that it can be used as a 4K webcam and you can specify focus points on your phone, and the fact that it will actually attempt to read the menu items to you via synthetic speech on models sold in North America.  (More about that and much more in my book, which you can pre-order now at a discount!)  If I keep my nose down I can have this finished by early March.

I'm doing two this coming week - one for Edmonton, Alberta (Canada), and one for a club in the UK.  These continue to be quite popular - one photo club even wants me to give a 4th talk for them (all different topics!).  I can do this for your photo club as well -- folks say they're very engaging and they always learn something new.  (Some even change their minds about long-held beliefs!)  More details at https://friedmanarchives.com/photo-clubs-only/ .

Probably the first thing that surprises people about Von Wong’s epic imagery is that very little of it is Photoshopped.  Everything you see has been staged and lit, often the result of weeks or months’ worth of effort, often times with the aid of a small army of volunteers.  And he has built his career so far on creating art that “lies on the intersection of fantasy and impact”.

The current issue contains probably probably the most interesting article I've written in the 10 years I've been with the magazine.  Von Wong is only 34 years old and his body of work is as amazing as it is diverse.  Read all about his journey from mining engineer to Social Impact Artist in the latest issue.  Subscribe to Cameracraft Magazine today!