Grandchild arrives - how these portraits were made

Please welcome our first grandchild, Mikah James Clark to the world.  And rather than acting like a doting grandfather, telling you how wonderful and angelic he is, I'll just share with you some pictures, taken when he was 1 week old: 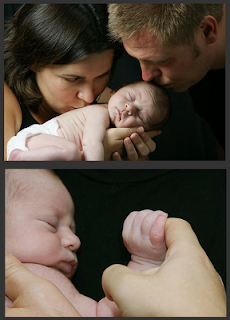 How were these shots taken?  Read more after the break to find out!
Did these shots require an expensive studio with thousands of dollars worth of lights?  NO!!!  Anyone who knows me knows that I like to get by with as little equipment as possible.  (I refuse, for example, to invest in "professional" studio lights - they are big, expensive, are a pain to set up and take down, and don't offer TTL flash exposure metering for those times I'm shooting on location under a time crunch.)  The images above (and the maternity shots at the end of last month's newsletter) were taken with only ONE flash (the Minolta 5600HS) and one softbox (which was designed to work specifically with wireless flashes, the Lastolite EZYBOX softbox).  A large black bedsheet was hung on the wall behind them with duct tape.  The softbox was set up to the left, and my wife held up a giant white sheet to the right (to act as a reflector to lighten the shadows).  To see the benefit of the fill sheet on the right, have a look at these test shots, taken with a different dad and a different baby: 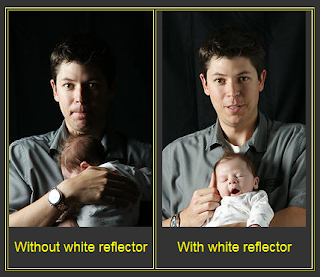 That's it!  Cheap but great lighting.  (The lighting is so good, in fact, that nobody will ever look at these shots and say, "Gee, those are great pictures... what kind of camera do you have?" :-) )  If you can't afford a softbox, I've found that bouncing the flash into a giant sheet also works well (as long as the sheet is close to your subject).  The only requirement is that the light be soft, and there are many ways to achieve that effect.

Because the dark background would likely have thrown off the automatic exposure, I set the 5600 flash to "Manual Output" (1/2 full power, I believe) and that was that.  Also, because the softbox can easily obscure the control signals from my camera's pop-up flash to the softbox flash, I mounted the flash onto the bracket (with the aid of the Sony / Minolta OS-1100 off-camera shoe adapter) sideways like in the photo below, so that the flash's light receiver was pointing toward the camera, while the flash head itself was directing its light into the rear of the softbox.

When I'm in the studio, one of the biggest problems I have is "Okay, what shall we shoot next?"  Coming up with novel compositions on the spot with time pressure can be a source of stress.  The solution?  Spend some time in pre-production sketching out some of the ideas you have for shots.  (In other words, pre-visualize the image.)  To aid the process, the baby's mother scoured the web and sent me some samples of other photographers' works and said "Here, can you take a picture like this?"  Is this plagiarism?  Maybe, but in the world of portraits it happens all the time, and you can use this technique as a jumping-off point and then create your own original shots afterwards.  (You can't copyright a pose!  :-) )
==================================================
Florida and Nova Scotia seminars are open for enrollment! http://www.FriedmanArchives.com/seminars
at August 04, 2008