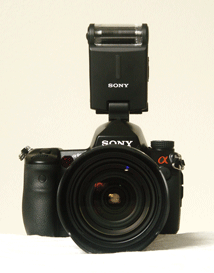 Oh happy day!  My biggest complaint about the A900 - mainly, its lack of a pop-up flash for triggering wireless - has essentially been solved by Sony, who has just started shipping its HVL-F20AM flash which is actually more versatile than a normal popup flash.  No longer must I attach a big, heavy, and expensive "58" flash just to control my wireless flashes!  Furthermore, unlike a purely infrared wireless flash controller (the usual manufacturer solution to the problem of triggering wireless flashes without a built-in flash), the "20" flash can do fill-in flash as well, something I love to use when shooting portraits outdoors.

I've been playing with this flash for about a week, and the more I experiment, the more I like it.  Here's what I like:
Things that aren't so remarkable:

That's OK; I'm actually glad that Sony designed-in the wide-angle diffuser, for I was able to take the flash apart and affix an infrared filter to that diffuser, turning the 20 into the world's most convenient and versatile Infrared Wireless Flash Controller on the planet.  (Recall from my books that I have always advocated attaching a piece of exposed and developed color negative film to the pop-up flash to prevent the wireless flash controller signals from ever appearing in the shot.  This is essential if you're shooting up close and wide open.)

So now, a twist of a knob will turn the 20 flash from a nice little fill flash to an infrared wireless controller!  I explain how to do it in detail (plus provide a more thorough review of the 20 flash) in my next article to be published in Photoworld, a magazine which I highly recommend.  (In fact, you can click here to get a discount on a subscription!). 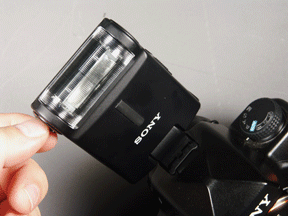