How I Lit this Child Prodigy 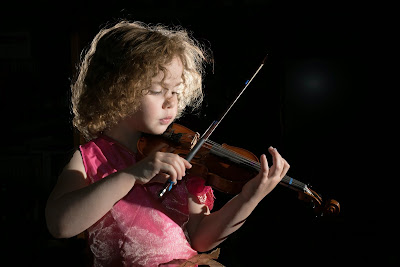 How I Lit this Child Prodigy

I took the shot above in a very confined space and so it was essential to have as little "light spill" as possible - that is, light only the subject and try to minimize any of the adjacent objects (like the bookshelf and chair behind her) from being lit as well.

And so I used two grids - one on the front of each flash - on the front, to keep the rays of light as parallel as possible. 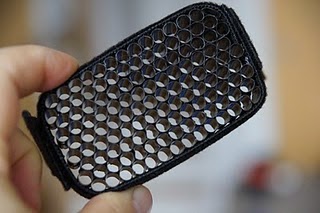 The first flash went behind the subject just to illuminate her entropy-laden hair. 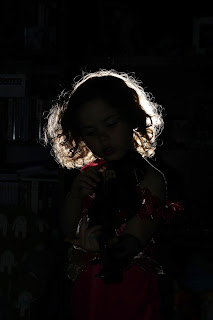 To make sure there was no ambient light showing up in the shot, I put the A77 II and kit lens into manual mode, chose as high a shutter speed as I could without going to HSS to ensure maximum distance of the flash, and I shot at about f/8 both to reduce ambient light some more, and also so I would hit the lens' sweet spot in terms of sharpness.

Then I placed a 2nd flash (also with a grid) to the subject's left. 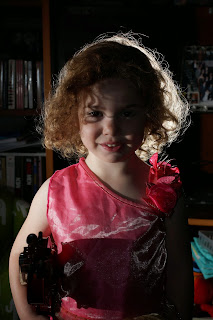 Yuk!  Bad aim and too-strong shadows.  Plus, once she started playing violin I realized her face would be pointing in the opposite direction.  So I quickly moved the light and got this: 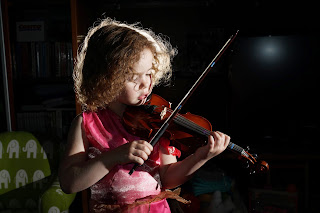 Better!  Still some light spill (especially with the green chair in the lower left corner), but I can attenuate that in Photoshop later.

So that was the easy part.  Now to overcome the variables I couldn't control: 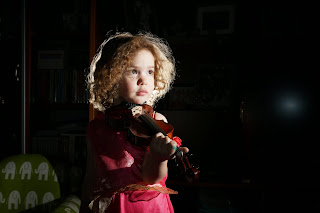 Great expression but there's no bow. 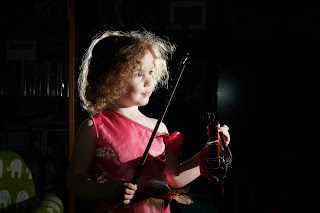 Perfect expression but she's not playing and you can hardly see the violin. 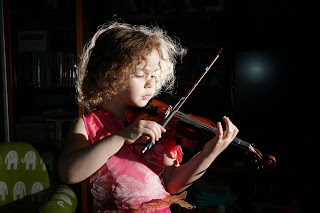 Aha!  Now to soften the highlights and darken the background in post-processing: 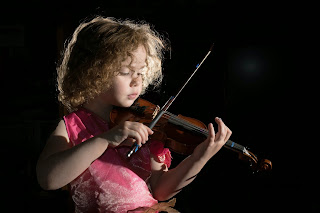 I took a total of about 45 pictures before getting this winner.  Not bad for having control over so few variables.  (As always, clicking on any of these images allows you to zoom in and see more detail.)

Below is a decidedly un-glamorous behind-the-scenes picture of how the lighting was done.  The two flashes are circled in yellow: 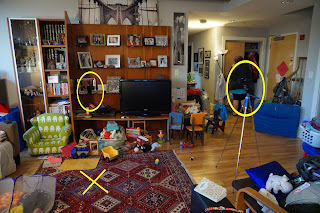 This shot would have been much easier had there not been such close quarters - doing it outdoors at night, for example, wouldn't have required any Photoshop afterwards.

(Shameless plug: Want to get your feet wet with wireless flash?  My ebooklet walks you through everything you need using a decidedly non-technical approach.)

A Footnote to Last Month's Video

The E-mount vs. A-mount autofocus video from last month's blog generated a lot of controversy.  Some were accusing me of hating one platform or another, others wondered whether a shooter in the real world would ever run up against such conditions.  (They probably won't, but the AF-C tracking difficulty starts to increase as soon as your lens' iris closes down.  The camera will have more difficulty at f/8 or f/11 compared to f/5.6, for example.)

Anyway, shortly after that blog was published I got an email from a reader who pointed out that perhaps if I were to turn Setting Effect OFF, there’s no reason for the camera to stop down just after focusing, and maybe the camera wouldn't have any difficulty at all in AF-C mode regardless of the f/stop you're using.

That sounded reasonable to me, so I tried it.  Nope.  When I made the video MENU --> Gear 2 --> Live View Display was set to Setting Effect OFF.  Setting it to Setting Effect ON made the camera stop down before AND after the initial AF operating, opening up only while finding AF for the first time.  This is how all the original NEX cameras behaved, from the NEX 3 and 5 to the NEX 7.  It's like having the camera in a permanent depth-of-field preview mode.  Interesting!

As you may have heard, I have packaged the first day of The Friedman Archives High-Impact Photography seminars as a steaming video (plus other reading materials and surprises sprinkled throughout), and it went on sale last month.  Here's an excerpt from an email I received from an early customer:

"You’ve given more that what is expected and this is why you are you!  You have shown your full knowledge of the subject and there are few others out there that have the whole package.  You know your subject, you know how to present it and you were born a genius.  Plus you are a colorful and dynamic teacher. Best of all, you can pass your message on.  This item is jam packed with everything you ever wanted to now about Photography, plus the humanitarian aspect of your presentation shines through."
Okay, so she's very enthusiastic, but I couldn't help pass it along.  "The Forgotten Secrets of the Kodachrome Shooters" is a different approach to teaching photography that is intuitive and memorable, and will result in a more drastic improvement to your photography than will, say, just buying an expensive lens.  (And it's cheaper, too!)

Nashville Seminar is in two weeks.

Sign up now and meet other attendees which traveled from several states away just to attend!  It will happen the last weekend in May, the 30-31st 2015 in Tennessee.

To all of you who have asked "Will you be coming out with a supplement covering Fujifilm's announced Firmware Version 4 of the X-T1 camera?", the answer is YES, and you'll receive it for free automatically if you bought it from the FriedmanArchives.com website.  (If you didn't, please email me your purchase receipt and I'll make sure you get a copy when it comes out, too.)

The Back-Button Focus for Sony Mirrorless Cameras e-booklet (by Ross Warner and myself) has been gettting very good reviews, and it will shortly be available in a German translation!  Send me an email at Gary at Friedman Archives dot com if you'd like to be notified of its release.

The Ebook on the Olympus E-M5 II has been out for about a month and is also getting great reviews from the early adopters.  Pass it on!

You've been hearing me talk lovingly about Cameracraft for the past couple of years, and some of you may still be on the fence regarding subscribing to this old-school print magazine.  For you, selected back issues (including the current issue, described below) are now available as downloads and can be purchased individually!  This is the ideal opportunity to give the magazine a try and see for yourself if the content really is head-and-shoulders above all the commercial photo magazines out there whose entire existence revolves around selling gear.

Cameracraft No 11 is packed with articles you won’t find anywhere else. At the heart of it there’s a superb underwater portfolio by Lawson Wood featuring locations where you, too, can dive with hammerhead sharks or chase the gliding shadows of giant rays.
Gary Friedman interviews photojournalist Patrick Ward on his quirky views of society both sides of the Atlantic, and later on the issue breaks the professional code by giving real useful advice for friend and family photographers asked to ‘cover’ a wedding.

We show a full series of images from Mark Seymour’s coverage of the Hope Foundation street kids charity in Kolkata… Michéla Griffiths shows her ‘streamscapes’ from a summer landscape exhibition… and Edwin Brosens makes you look twice, or turn the page quickly, with his sharp macro captures of garden insects isolated on white.

David Kilpatrick presents our quarterly update on technology and gear, and in a separate feature takes a crack at the trend for luxury lenses and the obsession with bokeh - are you, too, spending a fortune on new glass with exactly the same limitations as the 55mm on that handed-down 50-year-old SLR in the closet?

Cameracraft is an advertising free zone, with 44 pages on top quality art paper, designed to be kept. It’s a clean read without intrusive graphics, some 13,000 words of text and 87 images. Not a subscriber yet? We designed it to be economical to mail all round the world and you can save more by subscribing NOW!