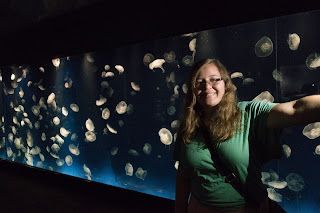 
Better Pictures Using Your Smartphone
I take family snapshots as much as the next guy.  And yet I cringe whenever I see the hallmark of a snapshot: A flash picture taken in a dark room, with the camera’s built-in flash as the sole source of light.  This is the universally acknowledged, Guinness-book-of-world-records worst way to light a shot.

Want an example?  Here's a picture of my wife (she took me to Disneyland for my birthday).  The first picture was taken in front of the world-famous castle with the RX-100 III using the pop-up flash in Program mode:

Right after this my wife Carol, who has listened to me lecture about the benefits of wireless flash for nearly a decade, had a great idea.  She reached into her purse, pulled out her smartphone, invoked the "Flashlight" app (which turns on a bright LED on the back of her phone), and held it at arm's length.  The results were "wireless flash without the wireless flash":


Here's another example, taken at the Chattanooga Aquarium.  Now in this instance the background was mostly black and so the camera's automatic exposure was going to get it wrong.  And so I did this shot in two steps:

Step 1) without a flashlight, put the camera into manual mode and adjusted the exposure so the background looked the way I wanted it to look (see below):


Step 2) Turned on the smartphone's flashlight, handed it to the subject, and had her hold it in “Rembrandt position” – 45 degrees up, 45 degrees to one side:


Boston and Nashville seminars – and what’s next

Just returned from a month traveling and giving seminars - first in Boston, then in Nashville.  But there's more in store!

I'm still working on logistics on all of these, so if you want to be put on the notification list, please fire off an email to Gary at Friedman Archives dot com.  More information about the seminars and why they're so important can be found at FriedmanArchives.com/seminars .

Why In-Camera GPS is Going Away

Have you been lamenting the loss of a built-in GPS receiver in the most recent batch of newly-introduced cameras?.  Manufacturers have been quietly discontinuing this feature without explanation.  I think I know why this is, and I also have some recommendations on alternatives which work better than what’s possible in a camera.

To understand the problem, think back to the earliest GPS units you could buy for your car.  (Garmin and TomTom had the market share for devices like these.)  It could take up to 10 minutes before it could acquire signals from enough satellites to infer its position properly!  Frustrating indeed.

Well, the GPS receiver in cameras can do no better than these early units.  It can sometimes take between 15 seconds and 10 minutes (depending on how much you’ve moved since the last successful position lock) to get a new lock, and very often you can get the shot and turn the camera before the GPS lock can happen.  Some early GPS cameras handled this problem by geotagging photos using the last known position; which often led to a large percentage of vacation shots being geotagged with old info.  Later incarnations wouldn’t geotag at all unless the satellites had been acquired, resulting in a large percentage of vacation shots having no geolocation data at all.  Given that the GPS system was designed for an open battlefield and not for high functionality in a dense urban environment, it’s amazing these things worked in our cameras at all.

“Yes, but hasn’t that problem been solved?”, I hear you ask.  “My mobile phone takes 2 seconds to figure out where I am!”  The answer is "sort of" -  the smartphones actually use a trick that’s not available to your camera: – they can triangulate with nearby cell phone towers to get a “pretty good” idea of where they are very quickly, and then that approximate location is made more accurate once the GPS satellites are locked onto.  Unless you own a Panasonic Lumix DMC-CM1, your camera won’t be able to use that trick.

As a sort of stopgap band-aid compromise, Olympus, Panasonic, and Fuji all have smartphone apps that communicate via WiFi to geotag images as you take them.  While nice, it's a huge battery drain on both the camera and smartphone.

Other Options You Have Now

One of the simplest and cheapest replacements for the lost GPS in your camera is to use a GPS logging app on your smartphone.  These apps, commonly called GeoTagging apps, log your whereabouts with a time stamp, and then merge the GPS coordinates into your images later on on your computer.  Just make sure the tracking device and the camera’s clocks are synchronized.   Early Geotracking apps made it a tiny hassle to transfer the GPX data to your computer, and then merging them into your photos via a separate program, but newer solutions have reduced to the number of steps to just one or two clicks.

Here are two such solutions that I feel are worth trying out:

I use this one myself.  My favorite feature is it doesn't drain my battery that much (Samsung Galaxy S5).  Not tied to any particular image editing program, GPP offers 2-click synchronization of your data: one button to upload the data to the cloud, then a 2nd button on your computer to geotag all files in a selected directory. Other than that it's straightforward.

This is a relatively new iOS- and Lightroom-only product that is designed to use the Apple Watch as a supplementary user interface.  Here's a more detailed description from the app's author, Neil Katz:

"My App lets you set metadata BEFORE you import into Lightroom, while you are taking photos. Or immediately after you take a photo.  For example if you are on safari and a pride of lions pops up, you can take all the picture you want then tell the app "last 20 photos keywords lions,pride" or last "20 minutes..." or last "100 feet...."

Clearly this product was designed by a photographer and not by a programmer. :-)

This is the only program I could find for Windows phone.  It's free, but no reviews after 3 years on the market.  It geotags .jpgs only.

One of the arguments against using smartphone apps in general is that it drains your battery faster than normal (although the two I recommended above do so the least of any I have knowledge of).  If you’re concerned about that, or are going to be in the middle of nowhere where there will be no cell phone towers to aid in location, then a hardware based solution might be right up your alley.

Got your own solution which you think merits mention?  Please share it in the comments section below!

“WOW! I couldn’t stop watching it. LOVED IT!!!! Learned a lot. Informative. Compelling / engaging. Variety of content & visuals. Balanced presentation: (technical vs not so technical, lecturing vs demos & visuals: you vs demos vs audience) . This is sounding like a love fest, but oh well. The content was unpredictable & rich with interesting, varied parts.

Most important for me: your style of instruction at its best respects the minds of your audience — appeals to common sense & first-hand experience. Is not esoteric, or indulges in academic or ultra-technical verbiage. Your manner is inviting, you’re obviously experienced, trust-worthy, benevolent, open & the audience likes & respects you (like I do). You earn all of that early in the talk & that makes the learning experience feel effortless — helps the audience relax & concentrate on what you’re saying.” – Sandra Shaw

What's she talking about?  Day 1 of The Friedman Archives Seminars, thoughtfully titled The Forgotten Secrets of the Kodachrome Shooters.  If you're not able to attend my 2-day seminar in person, the essence of Day 1 has been professionally videotaped and is now available to stream on your internet-connected device.

If you ever find yourself thinking, "I could take better vacation pictures if I only understood all of my camera's various modes", let me invite you to get your head out of online discussion forums and come over to the truth that we used to use in the olden days.  Kodachrome shooters didn't have any of these fancy features, nor was there Photoshop.  If they weren't necessary then, you don't need them now (at least not at first.)  This course will readjust the "all I need is more expensive gear" mentality and teach you how to get "Wow!" shots using ANY camera you own.  The truth is just one click away:   https://gumroad.com/l/FriedmanArchives-Kodachrome

Until next time...
Yours truly, Gary Friedman 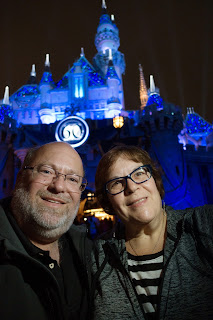