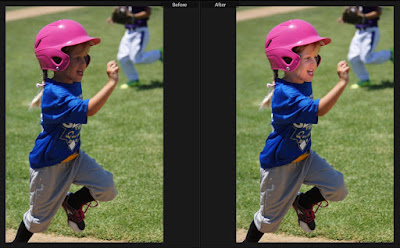 Also in this issue:
Baseball with RBS (Really Bad Shadows)

In the states, there is a special kind of baseball game called T-ball which caters to 4-year-olds.  Rather than having to hit a ball that is pitched to them, the baseball sits stationary on a stand (a “T”) and the kids swing the bat to hit it.

T-ball tournaments are all the rage here, but this month I witnessed what I think is pretty extraordinary.  At the end of the season there was a “World Series” playoff, and a whole team of T-ball players from Taiwan flew in to participate!

That’s right – a whole bunch of rich parents paid gobs of money to give their kids an international travel experience that they are very likely too young to appreciate.  I had the honor of shooting one of the games in this historic playoff.


To get these shots, I wanted as much of a classic fuzzy background as I could get, so I used my 80-200 f/2.8 and an A77 II set to “A”perture Priority mode at f/2.8.  Being a bright day, the camera naturally chose a fast shutter speed, appropos for sports.

Now in sports photography, you’re not in control of much.  Not your light, not the players, not the action.  And I was particularly hampered by the adult-sized hats that the players were wearing, casting giant shadows over their faces that looked dark to my eye and came out entirely too dark to the camera (which doesn’t have as much dynamic range as my eye).  If I was close I could use fill-flash, but if I wasn't...

Most of you are probably thinking “The shadow problem could be minimized if you shoot RAW and pull out the detail from the shadows later on”.  Which is true.  But it turns out RAW isn’t necessary here.  I daringly shot 2,000 pictures in .jpg only on “Standard” quality (hey, it’s a T-ball game!).

So could I squeeze great pictures out of jpgs that you've always been told couldn't be manipulated very much?  Have a look at some of these “before” and “after” shots (and click on any one to make it larger). 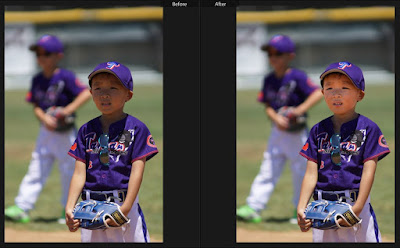 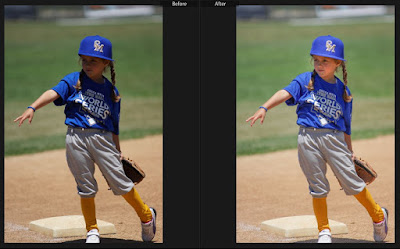 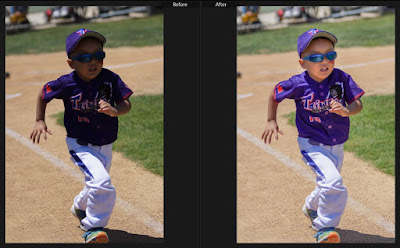 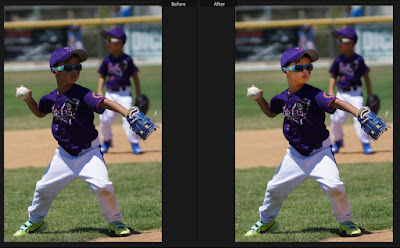 (Mind you, if I had had Face Detection turned on, the camera would have biased the exposure for the face and then the background would have been blown out, so that's not at all preferable.)

To get this effect I used the adjustment brush and the Auto Mask feature in Lightroom and essentially painted the faces lighter. (See Adjustment Brush settings below.)  Then I raised the shadow level and in some cases reduced the highlights just a little – doing too much of any of this will make it look post-processed and I definitely didn’t want that look for this game.


The team managers had no idea that I had done any of these things – instead they all remarked about how strong my colors were (something I never touch in post-processing).  The strong colors were a direct result of strong light.

Four more seminars are slated for the rest of this year, all of which are now open for registration (click on a link to take you to the appropriate page):


The Friedman Archives Seminars were originally designed for beginners who found the digital imaging learning curve to be too intimidating.  But to my surprise, its appeal has gone way beyond that demographic.  I have discovered that my approach is so unique that even old-time photographers with more than 30 years of experience under their belts have found them to be inspiring and intuitive.  Have a look at some testimonials from over the years...

What’s that?  Can't attend a seminar in person?  Now, after many months of editing them down to their essence, both Day 1 and Day 2 of the Friedman Archives Seminars are available for streaming!  Now you can attend the seminars in the comfort of your home, anywhere in the world.

You've heard me talking about these seminars for quite some time if you've been following the blog.  Go ahead - take the plunge and invest in your ability to see and execute your vision!

The e-booklet Back-Button Focus for your Sony Mirrorless Cameras by Ross Warner and me is now available in German!  Thanks to translator Bastian Scholten for this excellent work.

The latest issue of Cameracraft magazine is going to press soon.  As always, we have amassed a collection of work you won't find anywhere else designed to inspire and educate.  In the upcoming issue:

• The amazing beach dance photography of John Sutter and the creation of a masterpiece
• Glowing macro flowers by Treeza Condon - with a 36 megapixel pro camera but no budget for lenses
• Danny Cass takes street photography to a new level - up-close using his iPhone (and doesn't get beat up)
• Crop versus FF - the real quality comparison - David Kilpatrick shows why if you really want to shoot full frame, you need to max out the megapixels
• I publish my first rant in my regular column. :-)
• And this amazing artifact:  Richard Kilpatrick rescued and restored a complete Hasselblad newsdesk system from over 20 years ago, scouring the internet for rare parts, and discovered the news photos last seen on it by the agency which once owned it!

Ebooks in the Pipeline

One book covering the RX-100 MK4 and the RX-10 II will commence as soon as I get my hands on those cameras, followed by one on the A7r II.  Send me an email at Gary at Friedman Archives dot com if you'd like to be notified when these ebooks are released!


The Future of the A-Mount

I get a lot of email from die-hard Sony A-mount shooters, concerned by the seeming lack of announcements for products in the A-mount ecosystem.  Will Sony eventually abandon the platform?  Should they start to panic?

The short answer is "Don't panic; the A-mount is not going away"; however there is a longer, more nuanced answer.

The first thing you must understand about Sony is they are just recovering from a massive corporate reorganization, where several major divisions were sold off just so they could concentrate on being great in fewer areas.  You should also understand that in the last couple of years, the E-mount is the source of both growth and profit for the company, at a time when all DSLR sales have slowed.


Yes, according to this graph, DLSR sales (the A-mount is considered a DSLR for market research purposes) as a whole are much larger than mirrorless sales.  But if you break down the data from Sony's market share, the picture looks very different:

So Sony now has #1 market share in mirrorless while a single-digit, distant 4th place (behind Pentax) in the DSLR market.  It has been the full-frame A7 series of cameras that have been responsible for getting Sony closest to the goal they've had since they bought Minolta: To get people to convert over from Canon and Nikon.  (And, lately, Leica.)

If I were on Sony's board of directors (which I'm not), I would look at these sales figures, the profits, the growth, the industry buzz, and the endless cries of "There are not enough lenses for the E-mount", and decree "If we are to get back on our feet financially post-reorganization, the majority of our effort right now should be put into bolstering the E-mount platform."  And clearly that's what's been happening.  We have seen that the recently-announced A7r II has set some milestones for data throughput, and on-chip phase detection (and resolution, too, but Canon wins the award there) to the point where most of the advantages of the traditional DSLR or SLT seem to have been neglified (that’s a word!).

So is there still a place in the world for the A-mount?

1. Faster focusing and object tracking for stills.  If you're shooting an Olympic athlete with a very long lens, DSLRs have always had a strong performance advantage because of their highly evolved phase-detect autofocus system.  (Although with the announcement of the A7r II, this performance gap seems to be closing mighty quickly if not erased altogether.)
2. Better balance when using long telephoto lenses – the E-mount (specifically the NEX 3 and 5) was originally targeted at novices who wanted an upgrade path from their cellphones, and so small and tiny was the form factor, along with small-ish lenses.  And the bodies remain relatively small, so affixing a serious telephoto lens (like a 70-400 f/4 with an adapter) make for an unbalanced pair which is kind of kludgy to work with.
3. Better ergonomics – let's face it, a serious grip for the hand, and a plethora of buttons that fall where your fingers expect to find them, and a real, long-lasting battery make shooting with the A-mount in high-pressure situations more satisfying.  (I also have grown to love the twist-and-flip display on the high-end A-mount cameras – great for shooting kids at eye level in portrait orientation!)

Just about all of these advantages listed above appeal mainly to advanced or esoteric users – the right six-sigma of the bell curve, where very few of the average users' use cases actually fall. 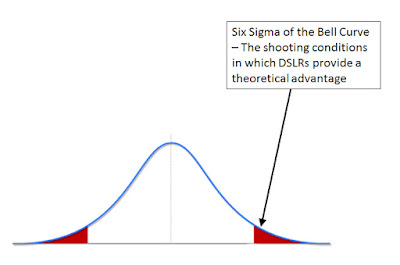 Nikon and Canon know this, which is why they don't see a real threat from the mirrorless world.  From their point of view, given all the advantages listed above, mirrorless provides no meaningful benefit to the really serious, professional, non-tourist, six-sigma photographer.  Besides, DSLR sales still continue to tower over mirrorless.  ("Plus, real photographers prefer optical viewfinders for their brightness when shooting outdoors.")  There is no compelling reason to aggressively pursue that market, so at least for now, they are safe.

But from Sony's point of view, the E-mount, and sensors, if executed properly, will be their financial savior.

So what of the A-mount?  It will not go away, but it will likely not become as popular as the E-mount, either.  It will continue to cater to the six-sigma customer, the one with esoteric needs.  I predict that in 20 years the DSLR category will be much like 8x10 view cameras are now – yes they still exist, yes they are better for very specific applications, but only the die-hards will be drawn to them.

And the A-mount platform will continue to benefit from whatever innovations develop for the E-mount.  For example, I predict the next A-mount camera will no longer have that translucent mirror, now that Sony has figured out how to put all the functionality on the sensor with the A7r II (and not just have it act as an assist to the main phase-detect array as it was on the A99).

So, panic not.  New models are on their way, and I greatly look forward to using them.  Your existing investment will still be taking great pictures 20 years from now.  And when people see you shooting with such a large camera in the future, you will be perceived as being a great photographer because, you know, bigger cameras take better pictures. :-) 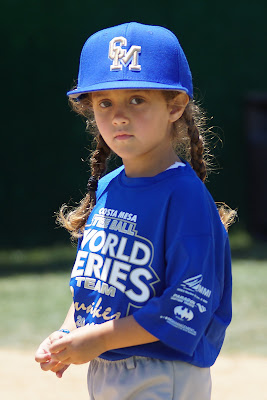