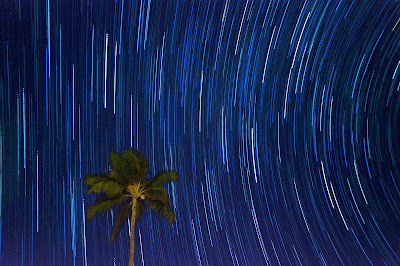 Believe it or not, I’ve never attempted this kind of a shot before.  Maybe because I thought it was too cliché; maybe because I grew up in Southern California where we never really had clear enough skies.  But whatever the reason, the first time I tried it was last week, while on a family vacation in Kauai, Hawaii.

Back in the days of film, this kind of a shot was straightforward: Put your camera on a tripod, set the shutter speed to “B”, use a locking cable release and keep your shutter open for an hour or two.  Not so with digital.  Leaving your shutter open for so long will develop so much noise that people looking at it would cringe.

For digital, we have to borrow from the techniques developed by astrophotographers – take a lot of shorter exposures and merge them all on your computer.  For this image, I took about 90 pictures at 30 seconds each, ISO 1000, at f/2.8.  Then I merged them on my computer using a great, free program called StarStaX (www.StarStax.net).


Because this was a family vacation, I brought one of the best cameras ever designed for family vacations: The new RX-10 II.  (You probably haven’t heard much about it because the whole world is going GaGa right now about the Sony A7r II.)  I also took the RX-100 IV, which is essentially the same camera but without the longer-reaching lens.  I’ll post some other vacation shots I took with these cameras throughout this blog post to keep you from getting bored.

The first challenge to overcome was that of framing and focusing the shot using an EVF.  To get shots like these you have to be in a place that is extremely dark – so dark that, even when amplified, your Live View image looks black.  How is one supposed to focus and compose under these conditions?

Short answer: For focusing, I set the focus mode to Manual Focus and set the focus distance to infinity.  For composition, I had to guess.  I pointed the camera in about the right direction and took a test shot.  Then I had to manually adjust the focusing a little bit, because apparently “infinity” means “a little further out than infinity”.  (Lots of lenses behave this way intentionally, to allow them to fully function when thermal expansion happens.)

With the shot composed the way I wanted, I used a RM-VPR1 wired cable release, set the camera to continuous shooting, and locked the cable release in the “down” position for about 45 minutes.

Then the fun part commenced.  Because I knew noise would be a concern, I shot in RAW, and reduced the noise on all of the images using Lightroom.  Then I took the resulting .jpgs and ran them through an easy to use program called StarStax.

With StarStax, you just drag all the images you want to merge into the left panel, and hit EDIT --> Start Processing, and wait.  (There are more options and controls, but for this image they weren’t needed.)  I then took the final product, did a slight curves adjustment in Photoshop, lightened the palm tree a little, and that was it!

I know what some of you are going to say: “Gary, I’ve been reading that Sony uses a compressed RAW format whose artifacts can show themselves under precisely these conditions.  Weren’t you gnashing your teeth in anguish about this issue?”

The answer is no.  I consider this an art image, and if there are compression artifacts visible around the bright-to-dark transitions, I sure wasn't able to see them.  On the other hand, I'm not an astrophotographer doing this for scientific purposes.  If I was, I'd probably be more concerned.

But there is a question that threw me initially: I had expected all of the star trails to form concentric circles around Polaris, the North Star (out-of-frame, to the right in the image).  This does indeed happen on the right half of the image, but as you look from right to left you see the stars' paths look straighter.  Here's the image again:

What's going on?  I put out the question on Facebook, and sure enough, David Kilpatrick (renown photo magazine publisher, including Cameracraft) provided the necessary insight:

"You're inside a big sphere, in effect, and the stars which make straight lines are directly overhead (moving like the sun does at the equator, if you aim your camera exactly east or west - from horizon to horizon straight over the top). The stars to your left and right will appear to make ever tighter circle until any star perfectly aligned with the earth's axis (Pole Star for north? more or less) will not move at all and will record as a point. But you have to be able to see that to record it. Not sure about Hawaii. In Scotland it's easy enough to put the Pole star centre shot and get complete circles. Close to the equator it is probably below the horizon or just above it."

I've said this before, and I'll say it again: That man is a fountain of knowledge.

And now, a word from our sponsor

Live Seminars
Even though you can now enjoy the seminars from the comfort of your home, I'm still doing live seminars, because hey, nothing beats learning in person.  The last 4 live seminars of the year are below.  Have you reserved your seat yet?


Ebooks in the Pipeline

As always, send me an email to Gary at Friedman Archives dot com if you'd like to be notified of their release.

That's it for now!  Until next time...
Yours Truly, Gary Friedman