A Month in Oceania 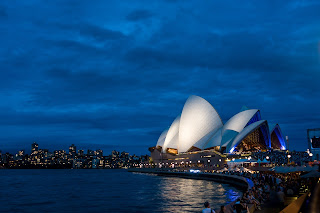 I just returned from a major trip to Australia and New Zealand.  Lots of photos and stories.  No time for a travelogue-style blog post.  I'll have to contain all of what I have to say to captions.  Here goes...

(As with all blog posts, click on any image to make it larger.  And sharper.)


More about this trip (including stories and what equipment I used, since everyone always seems to want to know that) can be found in the upcoming issue of f2 Cameracraft.

The A7r II ebook is out!  I'm hoping to have the .epub and .mobi conversions done before Christmas.  If you purchased the ebook via my website, you'll be automatically notified of the new versions when they become available.

The Spanish translation of the A6000 Ebook will be out in the same time frame.  Email me if you'd like to know when it becomes available.

Great Gifts:  I would be derelict in my duties if I didn't point out that both f2 Cameracraft magazine and the streaming version of The Friedman Archives Seminars make great holiday gifts for the photographically inclined folks in your life! :-)

Let's go back to that photo of the Ice Bar for just a second.  It took a long time to get that shot, for as impressive as the frozen room was, the ever-changing light just wasn't great for the camera.

Problem over, right?  Nope.  If you're going to have the image printed in a magazine (as this will be in the next issue of f2 Cameracraft), you have to take into account that if you convert this image to CMYK mode (the four colors used in offset printing) the image will look NOTHING like it did on the screen!  The screen creates its colors using additive light (combining different amounts of red, green, and blue), whereas the printing press by necessity uses the opposite of these colors (cyan, magenta, yellow, and then black for extra contrast).  Not all methods can represent all colors, and this picture, as luck would have it, has lots of colors that just fall "out of gamut": 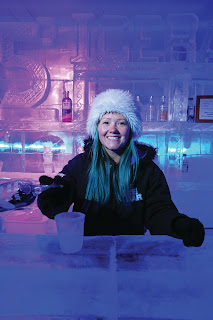 That beautiful blue which makes the shot is all muddy!!!  Yuk!  Most print houses would just print the version above, and the client would then be furious at the bad repro.  David Kilpatrick, publisher of f2 Cameracraft and king of all things printing, cares about the output so much that he spent 10 minutes tweaking the image in Photoshop in CMYK mode (something most print houses would simply never do) to make it look close to the original.  Here's what he did, in his own words:

"To get the big shifts needed in each colour channel, I use the ‘Camera Raw’ filter option first for processing the opened JPEG and changing the camera calibration - I had to make the blue a lot less purple and the reds more orange less magenta. Highlights and contrast needed adjustment too. I created an adjustment brush (in Camera Raw filter) which lifted the highlights and deepened shadows and also added exposure, and painted this over the ice without going over the bar attendant, until I felt that the ICEBAR logo and the texture of the ice was going to reproduce well. I worked on the image in RGB, but used the ‘Proof Colors’ options in Photoshop to see how it would print in CMYK, and returned to this between adjustments.

I find the Camera Raw filter very useful for working on JPEGs and prefer it to using layers. It’s actually the same as using some very complex layers, but much faster. It’s even better if you start with a 16-bit JPEG or TIFF, as these are nearly as good as an original raw file."

Below is the result which prints the same way it appears on screen: 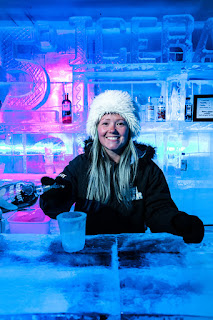 THIS is why professionals care about color matching between screen and print!  Had David not corrected this I would have been a bit miffed.

Footnote: In case you'd like to visit the Ice Bar yourself, their address is:

That's it!  Next month I'm going to have some kickstarter ideas for you. :-)